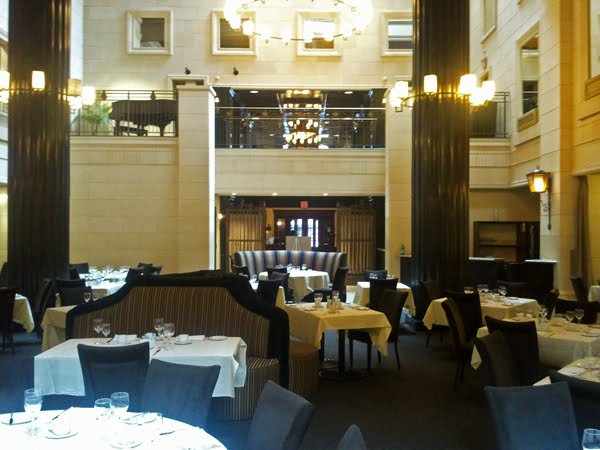 The Courtyard Cafe at the Windsor Arms hotel

Last weekend Aisha and I visited one of my top picks for our wedding space: the Windsor Arms hotel. As I mentioned in my last post about the spot, it’s a classy space, and the Courtyard Cafe is big enough if we want to have a larger wedding, but it will also accommodate something smaller too.

The hotel also has a lot of room for a reception, whether we want to take over space on the second floor, or use their restaurant Prime, or even the tea room. I also like the idea that we get a suite at the hotel before the wedding, and we might even consider staying for two nights.

Next up on our list of spaces is Archeo in the Distillery District, which we’re seeing in a little over a week, but we have a few new venues we want to check out, including Malaparte on the sixth floor of TIFF Bell Lightbox, which is run by Oliver & Bonacini, the same people behind Canoe restaurant.

On a smaller scale though, Aisha also came up with a few new spaces to look at, including 180 Panorama, the Steam Whistle Brewery, Currie Hall at the National Ballet School, and Enoch Turner Schoolhouse, to name a few.

This really just scratches the surface of the spaces that Toronto has to offer, but we’re slowly coming up with our list of favorites, and a plan for what we want to do with the space.

Once we have that settled, it becomes a lot easier to imagine what comes next. Where do we hold the ceremony in the space, is it going to be a seated dinner or will we have more of an informal setup? And, yes, what kind of theme are we going to go with? An early favorite so far: red carpet film party.

And we still have to look at clothes, rings, invitations, and food. October is starting to look like it’s just around the corner.

We’re getting married in the fall and were thinking about the Schoolhouse too. Have you gone to check it out yet?

Sorry, no. We haven’t seen it. We’ve narrowed it down to two other venues, and it’s been pretty hard to decide.