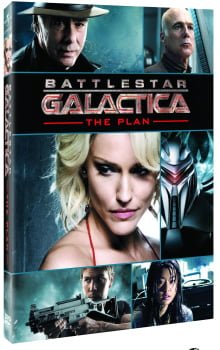 Courtesy of Universal Studios Home Entertainment Canada, The GATE is giving away ten copies of Battlestar Galactica: The Plan.

Released on DVD and Blu-ray on October 27, the film follows humanity’s fight for survival, but through the eyes of their enemies, the Cylons.

The DVD and Blu-ray edition also include deleted scenes, featurettes on the making of the film, interviews with the actors, a look at the Cylon plan, and a commentary track by Olmos.

To enter for a chance to win one of ten copies of Battlestar Galactica: The Plan, complete the form below. Ten lucky people will win a DVD, plus a GATE t-shirt.

The giveaway is open until Friday, November 6 at 11:59 PM (ET) and you must be over the age of 16 and located within Canada to enter. Winners will be chosen in a random draw from all available entries.

SYNOPSIS: The Cylons began as humanity’s robot servants. They rebelled and evolved and now they look like us. Their plan is simple: destroy the race that enslaved them. But when their devastating attack leaves human survivors, the Cylons have to improvise. Battlestar Galatica: The Plan tells the story of two powerful Cylon leaders, working separately, and their determination to finish the task.