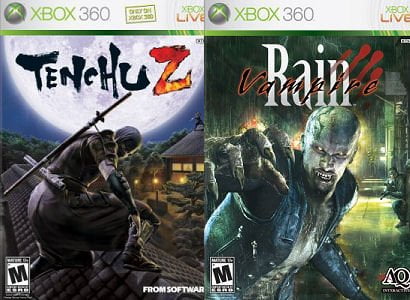 In my mind the Xbox 360 is still the top console out there for any self-respecting, hardcore gamer who actually likes to play mature-themed games that don’t centre around Italians with mushroom fixations. But it seems like, in the mad rush to get as many games out as possible, the Xbox 360 is getting a lot of really crappy games all of a sudden – at least as far as the recent batch of Microsoft Game Studios titles are concerned.

Take Tenchu Z and Vampire Rain for example. Normally I don’t review two games at once, but these titles are so howlingly bad, I can’t imagine spending the time writing two standalone articles when one will do. They’re also so bad I can’t imagine what Microsoft was thinking.

Both games have the same concept, but done in two different styles: you’re a guy trying to sneak around and kill off the bad guys. Yes, much like a fart in an elevator, your goal is to be unrecognized until it’s too late. In the case of Tenchu Z you’re a ninja trained in the art of stalking the prey you’ve been hired to kill, while in Vampire Rain‘s case you’re a trained soldier fighting a city full of vampires.

The games vary wildly, there’s no question about that, but they both approach the gameplay with such a lack of style that you can’t help but laugh. While wandering around a village in Tenchu Z as you stalk down guards or your eventual target, you might be seen, cause an uproar for a minute, and then be completely forgotten the next minute. The game is an exemplary case of what I’d call the worst AI that I’ve seen since the Xbox 360 came out.

Likewise, in Vampire Rain, you can practically walk right up behind a vampire, and as long as they don’t see you, they won’t do a damn thing. Yes, yes, the plot tells us that vampires can’t smell you in the rain, but the AI still seems sub-sub-human. On top of that neither game understands what it means to have good dialogue, or an interesting plot, and in the case of Vampire Rain some of the dialogue is laugh-out-loud bad. It’s like the worst b-grade horror movie come to life as a lame shooter, but it just makes the eventual gameplay all the harder to take seriously.

Neither game is all bad, but Tenchu Z is probably the slightly better title of the two, based solely on it’s gameplay. While you might have to repeat the same objectives over and over again as you go through the levels, I do like the look of the game, and some of the unique ways you can attack and kill enemies. There’s also a certain charm to the upgrades you can buy, the customization of your character, and the graphics.

As for Vampire Rain, it has a nice feel, and the graphics have their moments, but the best thing I can say about it is that it’s funny and ever so slightly gory. The gameplay is just awful.

Microsoft has had some bad titles before but they don’t get much worse than Vampire Rain, or Tenchu Z. If you wait for a couple of weeks you can probably pick either of these titles up from the discount shelf, but I hope these aren’t examples of what we can expect over the next few months before any of the big titles come out this fall.

If these are the best things Microsoft can offer right now I think I’m content to play Gears of War for a few more weeks until something good comes along. The number of great titles from third-party publishers also doesn’t hurt the Xbox, but should Microsoft really take the battle for the top-selling console seriously, they’d do well to hide titles like these under the nearest rug.