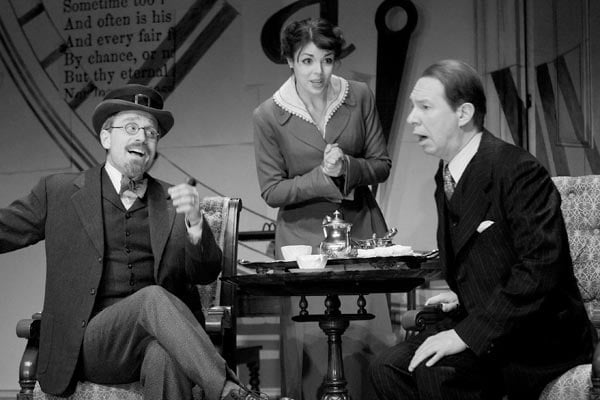 On until March 21
The Young Centre – 55 Mill Street

The question “what if?” is all the fertilizer needed to sprinkle on the waking thoughts of most playwrights. Travesties, which opened February 18, was inspired by Tom Stoppard‘s discovery that James Joyce, Lenin and Dadaist founder Tristan Tzara were all living in Zurich in 1917. There is no evidence they actually met, but the idea that they may have bumped into each other at the public library is enough to build a scenario on. Stoppard adds another lens: the retired British consular official Henry Carr, whose memory years later intertwines the real and imagined during his time in Switzerland.

Travesties is all we’ve come to expect from a Stoppard play; it is brimming with repartee (in this case about the nature of art and society) and overflowing with bon mots delivered rapid fire. Stoppard is quoted in the program as saying that his plays may appear fragmented but “everything is logical and rational.” That said, time isn’t linear in a Stoppard play, and Travesties characters repeat certain sequences, providing a sense of comic foreshadowing. The effect is like a modern DJ manipulating vinyl so that phrases are repeated over and over.

Soulpepper’s production reaches the standard of excellence set by the playwright. Delivering the challengingly staccato dialogue is the seasoned Soulpepper gang, most notably the group’s founding member Diego Matamoros as the eccentric and sartorially obsessed civil servant Henry Carr.

Another stand out was Jordan Pettle, who portrayed tortured artist Tzara with the right amount of frenzied passion. The direction by Joseph Ziegler also delivers an amusing swirl of physical comedy to support the head-spinning dialogue. The cast is clearly having fun yet trying not to break each other up.

Set and costume designer Christina Poddubiuk perfectly frames the surreal play action with a set dominated by a huge black and white clock face. Stoppard’s staccato quips and quirky philosophical takes demand that attention be paid – “I’ll have to see this again,” muttered an audience member as we filed out. For the theatre goer, Soulpepper provides the best possible gift – reliability.