Attack In Black raise the bar on ‘Marriage’ 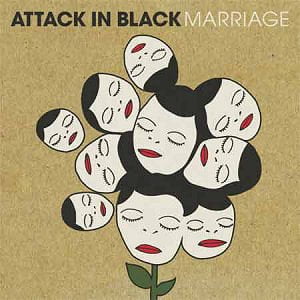 When a band releases their first full-length album they sometimes play it safe. The songs are consistent with few surprises and appeal to a wider audience as opposed to a specific group. For Attack in Black‘s first full-length album, Marriage, they practically ran in the opposite direction of that theory. Ironing out a more stable, controlled sound since their EP, Widows, this album is going to give punk rock bands a challenge to deliver quality rather than filler.

Filled with intense, catchy beats it’s impossible to stay still when this album plays. “Young Leaves” leaves no choice but to belt out each word along with the guys, whether you’re in your car with the windows down or walking in the street. It’s not all fast-paced rock however; songs like “Chimes and Church Bells” will mellow your soul with deep organs and heart-breaking lyrics. Push play on a song like “Footprints” and your ears get a little something different with a folk-rock feel leaving you bobbin’ around the room singing, “maybe there’s a footprint I left a life ago/if so, there’s something beautiful/out there, somewhere, I know.”

Though Attack in Black has strength in their perfectly packaged melodies and unique vocals, their lyrics are packed with simple truths and effortless understanding. Each song carries a different sound, a new revelation and perspective. Thought provoking and insightful, lyrics like these come far and few between.

Attack in Black will hopefully continue raising the bar even higher and either teach the pedestrian punk bands out there a lesson or leave them behind.