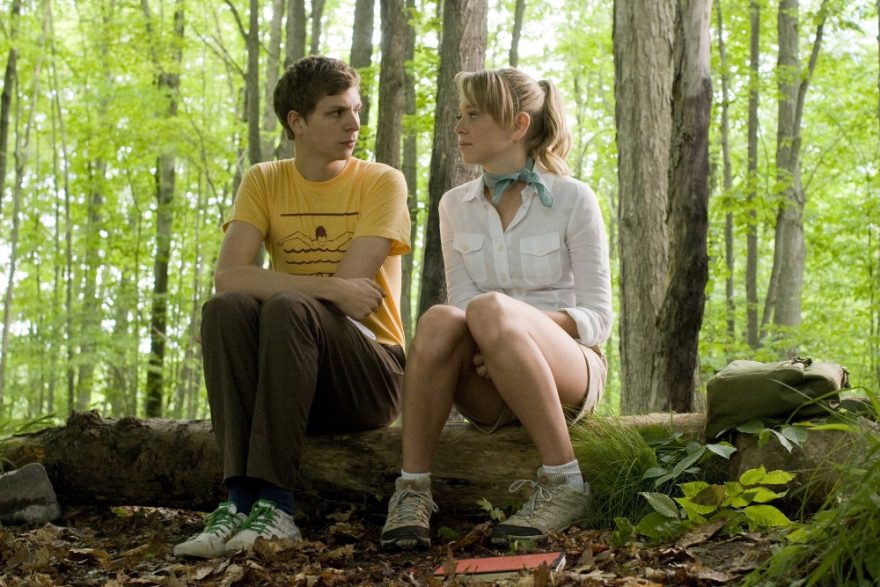 Available this week on store shelves: Michael Cera plays a very familiar character in Youth In Revolt; Denzel Washington and Mila Kunis try to survive a barren future in The Book of Eli; and a look at Caddyshack on Blu-ray.

Michael Cera seems to be in a rut. Much as I love his films, most of his roles revolve around the same startled-doe expression that he’s worn since Superbad and his stint on Arrested Development.

Youth In Revolt does throw a little twist into his usual act though.

Based on the famed novel by C. D. Payne, Youth In Revolt is the story of a teenager, wise beyond his years and stuck between his divorced parents, who dreams of losing his virginity.

Cera stars as Nick Twisp, the thoughtful teen who believes that nice guys always finish last. So when his short-lived summer romance with Sheeni Saunders, played by Portia Doubleday, comes to an end, the two would-be lovers work to find a way that they can still be together.

The solution is simple. Nick will do what it takes to play the bad boy so his divorced mother will ship him off to live with his father, who has conveniently moved to the same area as Sheeni.

Life is never quite that simple though, and despite Nick’s best plans, everything goes awry and Nick not only has to chase after his Sheeni, with their little dog in tow, but he also has to avoid getting arrested.

Thanks to the film’s fantastic cast, which also includes Steve Buscemi, Jean Smart, and Justin Long, Youth In Revolt is a wonderfully quirky, funny dramedy.

Cera’s opportunity to play both versions of Nick also finally affords the star a chance to step out of his comfort zone. The old Cera we’re used to seeing is there, giving Nick the right level of troubled awkwardness and amazement, but his alter-ego, Francois Dillinger, kind of steals the show.

Director Miguel Arteta otherwise makes solid use of Payne’s iconically absurd source material, aiming for what I can only call a light level of general absurdity. Since the script is also paced languidly, almost like the drug-induced haze that seems to spread over the final chapter of the film, the whole story feels strange, and dreamlike, although it is nonetheless very funny.

Youth In Revolt is a charming, funny story though, and despite some of his schemes, you can’t help but root for Nick to hunt down the love of his life, and win her over.

DVD features are sparse, but the film includes a commentary with Arteta and Cera, deleted scenes, and audition footage.

If Hollywood is to be believed, the not-too-distant future is going to be one sorry place to live. Time and again, filmmakers have shown us society’s collapse, and a number of possible, mostly depressing, futures. And while the idea of a post-apocalyptic tomorrow has been worked almost to death over the years, the Hughes brothers have taken a stab at showing us one more time just how desolate and awful our world could become.

Denzel Washington stars as Eli, a wandering man, trekking across the barren landscape of what I can only imagine is middle America, a place devoid of life, and filled with the refuse of our long-dead society. Carrying one precious possession – potentially the last surviving Bible – Eli is what you might call a problem solver, whether he’s hunting for food, or dealing with a gang of hijackers waiting by the side of the road.

Wandering into the devastated ruins of a town, Eli quickly runs afoul of the local thugs and their boss, Carnegie, played by Gary Oldman. Thinking the tough and smart Eli might be a good addition to his band of common thugs, Carnegie throws Eli into a room for the night without realizing the man has something he wants – namely, the Bible – a tool that Carnegie wants to use to draw people to his towns.

What follows is a cat and mouse game as Eli escapes Carnegie and tries to continue his journey West. But along the way Eli gets bogged down babysitting Carnegie’s adopted daughter Solara, played by Mila Kunis, who can’t take her step-father’s horrible nature any longer.

Considering the film’s fantastic opening action scenes, intriguing religious undertones, and impressive cinematography, I was very hopeful about The Book of Eli. Early into the film I was even enjoying myself, but well before the half-way mark it’s clear that the script is little more than a thinly written tale wrapped around a MacGuffin – a plot device that drives the story, but doesn’t actually do much of anything.

Verging on being preachy at times, the Hughes brothers have made an interesting mix of violence and religion, one that some might consider a little revolting, to be honest. However, it does make for a strong statement on belief and religion. That said, all of those elements feel thrown together, rather than carefully thought out. Given a stronger script, this tone and story might have been a whole lot more interesting.

When the film is going well, the Hughes brothers make great use of the cast at the very least, often thanks to the chemistry between the stars. Washington and Oldman are very good, although it’s almost a shame that they don’t share more time on screen. But, there are still just too many pieces that don’t fit together, and part of the ending is literally laugh-out-loud ridiculous.

While I loved the picture that the Hughes brothers have painted of this distant tomorrow, I left the film feeling utterly unsatisfied, and maybe even a little cheated. I’d recommend The Book of Eli to genre fans, but only with the clear warning that you will ultimately walk away wondering why such a long trip ends with such a meagre reward.

Lastly, Harold Ramis’ Caddyshack is also out on Blu-ray, and I couldn’t miss a chance to mention this hilarious farce from the 80s.

Starring Michael O’Keefe, Bill Murray and Chevy Chase, the film follows Danny, played by O’Keefe, a caddy at an upscale country club as he tries to win a scholarship that could help him go to college.

Meanwhile, a rogue gopher is causing trouble on the greens as it digs countless holes that are ruining people’s games. Carl, the assistant greenskeeper, is charged with doing whatever it takes to rid the club of the little brown scourge.

The film obviously shows its age on Blu-ray, particularly because most films from this era were not filmed on the best stock, but the transfer is great, and Caddyshack still looks very good after all these years.

Thanks to the hilarious cast, Caddyshack is also still a lot of fun, earning itself a permanent spot on my list of favorite comedies.