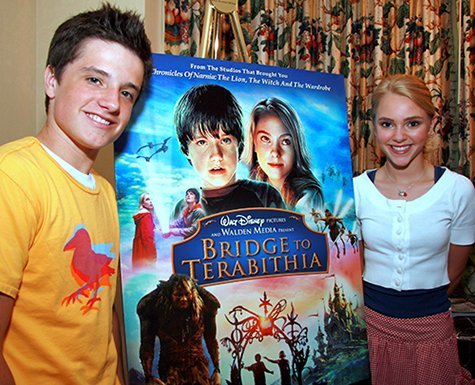 Now, in the new film from director Gabor Csupo, which is available on Disney DVD, we get to see Paterson’s tale come to life with Josh Hutcherson as Jess, and AnnaSophia Robb in the role of Leslie – two friends who escape from the pressures of school and adolescence by imagining a new world that they call Terabithia.

I had a chance to sit down with the two stars of the film to talk about their roles, their imaginative careers, and what comes next for the two popular actors.

Andrew: “Was that difficult to portray, or how did you find it?”

AnnaSophia: “Well, some of the CG work was kind of hard because there was nothing there and we had to look at a piece of tape and be afraid of it and start running for our lives. But it kind of also got me into Leslie mode because they didn’t have anything to look at – they were using their imaginations too.”
Josh: “Yeah, that’s a good way to put it.” AnnaSophia Robb in Bridge to Terabithia
Andrew: “As actors, I expect you must have pretty vivid imaginations anyway.”

Josh: “Oh yeah. I think that’s necessary for any actor to pretty much be insane. You know, you have to be very imaginative, and you have to use your imagination all the time. I mean, that’s what we do. Every single day on set we’re imagining we’re different people in different situations so it’s just another aspect of adding in other characters with your mind.”

Andrew: “Off set do you find you’re imagination is still running wild?”

AnnaSophia: “Definitely.”
Josh: “Oh yeah.”
AnnaSophia: “Yeah, when I allow myself I daydream. Totally. You just kind of think about things and go off in your own little headspace. And I read a lot so that broadens my imagination, and as an actor it’s so much to pretend to be someone else and just to like, get in their skin; to actually become them, and then pop right back out and into yourself.”

Andrew: “Do you have particular authors that you’re big fans of? Or directors for that matter?”

AnnaSophia: “No, you know, it’s kind of like my taste in music. I like to watch a lot of different genres, I like to read a lot of different books, I mean I love fantasy and fiction books. I just don’t like reading slow-paced books that I have to read 100 pages just to get into. That just kills me, I get so bored. But I’m kind of just open to anything.”
Josh: “I don’t read tons, but I like to read scripts, that’s probably my favorite thing to read because they’re quick, they compact an entire hour-and-a-half movie into a quick little hundred page story. That’s really great for me because I don’t like long books – I can’t stand long books. It looses my attention. If it takes me more than an-hour-and-a-half or two hours to read something, I won’t come back to it. If I start to read a book and I get like 15 chapters in, and I’m like three-quarters of the way through the book, and it’s been two-and-a-half hours, I’m not even going to…”
AnnaSophia: “What about Eragon?”
Josh: “That was the only one that I’ve really read that I’ve enjoyed reading throughout it periodically. But no, I like scripts because they’re short, quick, and they have a lot of stage direction and meat to them.” Josh Hutcherson in Bridge to Terabithia
Andrew: “Do you have a particular script that you’ve recently read that you enjoyed?”

Josh: “I did a movie called Winged Creatures and I loved that script. That’s one of my favorite scripts that I’ve ever read. It was a hard read though, it was really kind of confusing and it intertwined, and it was really one of those that you had to read and go, ‘Okay, hold on a second. What’s happening here? Whose storyline am I following?’ It jumps around but it’s great, I love it.”

Andrew: “What was your favorite part of filming Bridge to Terabithia?”

AnnaSophia: “I think some of my favorite parts was probably getting to New Zealand. It was amazingly beautiful there and we got to live on the ocean and we so much fun. Just playing on the beach after set, and the crew was amazing, and it was just so much fun. And also my wardrobe was fantastic. ”
Josh: “That was great. New Zealand was amazing but my wardrobe was so-so. [laugh] But you know I loved getting to work with the stunts because we had to do some stunts in the movie and that was so much fun. I love doing all my own stunts in my movies, as much as they’ll let me. Because there are some times where it’s too dangerous or whatever, but you know, I try to convince them otherwise.”

Andrew: “What was your favorite stunt then?”

Josh: “In Terabithia my favorite stunt is when I’m falling and I fall into the giant’s hand. Because actually, on the tree house, the tree house was about 10 feet off the ground or so, I got to run and jump of it as high as I could and do a little flip kind of turn and land on my back on a pad. Which is a pretty cool stunt, because normally in a situation like that they have a stunt person do it, but I’d done that kind of thing before, so I was like, ‘Let me do it, it’s so much fun. Please, go on, let me do it.’ So that was fun, but for me I did a movie called Journey to the Center of the Earth this time last year and there were so many stunts in that movie. I don’t even know where to begin on which one was the most fun. Every single day there was stunt work.”
AnnaSophia: “That sounds like fun.”

Andrew: “So what are you two doing next?”

AnnaSophia: “Well, the next thing that’s coming out for me are A West Texas Children’s Story [now titled Have Dreams, Will Travel] and Ferris Wheel. Ferris Wheel is now named Sleepwalking. And then I also did a movie called Jumper that filmed here [in Toronto] and I had a small role in that. That should be coming out in early 2008, but I’m excited about seeing that – I look totally different from this film.”
Josh: “For me I have Winged Creatures which is coming out this fall and Journey to then Journey to the Center of the Earth [also known as Journey 3-D] next summer. And for this summer I’m just kind of taking it off and staying at home in Kentucky and enjoying it.”

Andrew: “You both have had great careers – looking forward to seeing your next roles.”