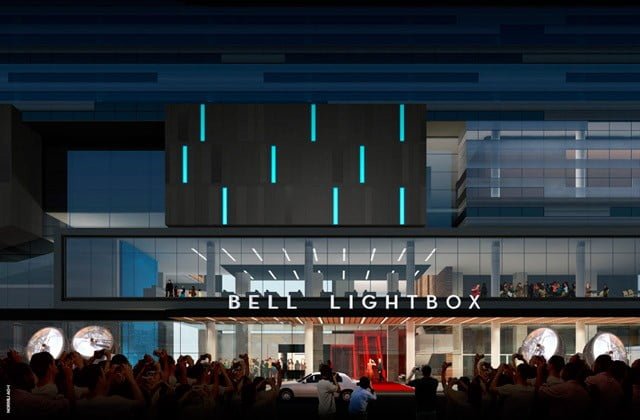 Before the 2009 Toronto International Film Festival started this year, I was lucky enough to preview something that has been in production for over two and a half years, and will end up shaping the future of the event, and organization, immensely.

I’m not talking about a film or anything else quite as ephemeral though. The preview I glimpsed is all concrete, glass and steel, but in the next year it will undergo a transformation to become the year-round home for the Toronto International Film Festival.

Yes, my little sneak peek was actually a tour of the soon-to-be-completed Bell Lightbox.

Currently under construction at the corner of King Street and John Street in downtown Toronto, Bell Lightbox is the result of years of work and planning, bringing together the TIFF offices inside a multi-use space that includes exhibition halls, theatres, and education areas.

Supported by the Canadian and Ontario governments, a number of companies, and situated on land that was donated by filmmaker Ivan Reitman and his sisters Agi Mandel and Susan Michaels, not to mention the Daniels Corporation, Bell Lightbox will be a state-of-the-art facility that I personally can’t wait to see completed.

While the video below will give you an early glimpse into the halls of the impressive space, there are a lot of notable extras worth mentioning.

For one thing, the theatres in the space are all constructed using a “box within a box system” that isolates each room from outside noise. Bell Lightbox artistic director Noah Cowan, who led the tour of the building, suggested this system would give theatre-goers “among the most pristine viewing experiences one can actually have in a cinema.”

Also notable is the fact that TIFF’s Lightbox will be open 364 days a year. “The day that we’re most likely to be closed,” Cowan joked, is not Christmas or even Boxing Day, “[it is] the day after the Film Fest. For cleanup.” Although he also said the theatres will likely be dark one morning and afternoon weekly – probably Mondays.

The other great news for local film fans is the fact that Bell Lightbox also has space on the first floor for large exhibits which, prior to this, have not existed in Toronto. A great example of that is the fact that the Tim Burton exhibit, which is currently on display at New York’s Museum of Modern Art, will be at Lightbox starting November 2010.

It is also interesting to note that the entire building will be wired for video, for both capture and broadcast, and on a different note, the fifth floor will house the Canadian Film Heritage Gallery, a brand new space that will give people a new opportunity to explore Canada’s film history.

Currently, TIFF plans to have Bell Lightbox officially open for October of 2010, but Cowan noted that as long as there are no construction delays, we can expect to see a few events taking place within the building during the 2010 TIFF.

You can find out more about Bell Lightbox at www.belllightbox.ca.

Watch some highlights from the tour: