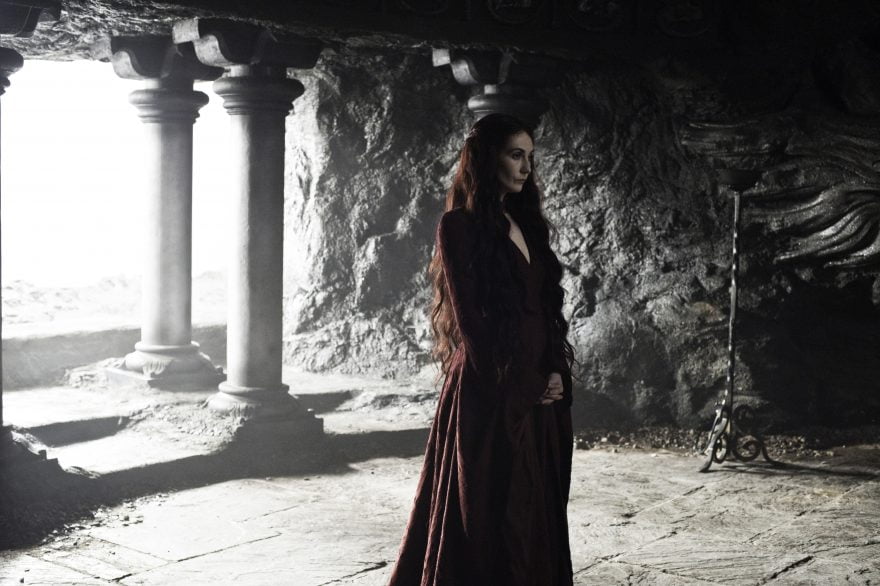 Carice van Houten seems like a normal actress, if you meet her in person, but on HBO’s Game of Thrones she’s the wickedly powerful Melisandre, servant to the Lord of Light, and one of the characters who seems most likely to inspire fear among all other mortals.

Last year, during the Toronto International Film Festival, Houten answered a few questions about filming the fourth season of the epic series, and it’s almost easy to forget while you’re chatting with her that her counterpart on screen is downright frightening. Beautiful, but darkly foreboding in almost every way.

During a recent interview about season 4 of Game of Thrones, Houten talked about Melisandre first appearance this season, her character’s goals, and the fact that this deadly woman also calls upon magic from time to time–unlike most of the other heroes and villains. But, some of the best moments in the interview are when Houten opens up about playing this part, the fan reactions to her character, and the fact that she’s actually allergic to horses so a stunt person fills in for her when they need to show Melisandre on horseback.

Read the interview below with Carice van Houten, and watch the premier of Game of Thrones on HBO and HBO Canada tomorrow, Sunday, April 6 at 9:00 PM (ET/MT).

Question: Set the scene for your character as we begin season 4.

Carice van Houten: “We start by seeing her doing a certain ritual–I can’t be more specific than that–and then we get a little peek behind the scenes of Stannis’ [Baratheon, Stephen Dillane] household. So you see Stannis and his two wives–basically, me and his own wife Selyse [Tara Fitzgerald]–and you get to enjoy the dynamics between the three of us.”

Q: What are those dynamics? A little tense?

CVH: “Of course it’s very tense, but the funny thing is Selyse’s on my side more than anyone else. She is a believer, a true believer in the Lord of Light, so she’s in awe of the fact that I represent this religion. But also I think there must be some sort of jealousy. So we see a little bit more of that, and we see my relationship to their child who is not, per se, on my team–which of course is a nuisance for me. Be assured that Melisandre will convince this child that the Lord of Light is not all bad. She’ll make sure of that.”

Q: What kind of character progression will we see?

CVH: “Well, we will get to see the slightest chink of humour in Melisandre. It’s very, very little, again in a scene with Stannis’ wife, but I very much enjoyed doing that because I’m actually used to playing lighter characters. For some reason in Hollywood I always get cast as angry ex-wives or mean witches – do I have such a stern look? But in my own country I play light-hearted, romantic comedy stuff, so I really enjoyed that tiny hint of humour.”

Q: What is Melisandre’s overall goal?

CVH: “She still wants Stannis to be on the Iron Throne. But the interesting thing is that in this season they have to travel because as we know, we left her and Stannis and Davos [Liam Cunningham] in season 3 with that scene where she saves Davos’ life and says the true war is in the north. So they probably need to head in that direction. And then, of course, the worlds collide and that’s when it’s going to get interesting.”

CVH: “I still believe she has the right intentions: that she really thinks she’s going to save the world with Stannis on the throne. But since we cannot look into the future and she’s a very mysterious character, and I’ve had several hints of people talking to me about her true intentions, I’m not sure anymore. That’s why it’s so difficult to talk about it, because I know certain things that I really cannot say–there may be a big twist!”

Q: You spend much of this season travelling on horseback. How’s your riding?

CVH: “Actually a lot of the scenes on horseback were done with doubles. It has something to do with the fact that I’m very allergic to horses! So for the insurance they were afraid to put me on a horse. I filled in a form initially that said, ‘Yes, I’m allergic to animals, certain hairs, but if I take something, it’s fine’. I think they took it very seriously and said, ‘No, you cannot even look at a horse anymore’. But actually I quite like the feel of riding. I mean I’m afraid, but it’s also a challenge to do stuff that you’re afraid of.”

Q: Yours is one of the characters who actually gets to do magic. Are those scenes enjoyable to film?

CVH: “I love those scenes because they’re so unusual–you don’t really see magic that often in a series that otherwise is so modern in a way, about regular life but in a war situation. Even scenes like drinking the poisonous wine without blinking–I love that stuff! I would love to do more magic. I’m sure the writers have more up their sleeve. In the fourth season you do see a little more of Melisandre’s room and the stuff she uses–she has a little cabinet of powders. This one puts people to sleep, that one makes men wildly lustful, this one will kill you instantly–I loved that.”

Q: What it’s like to work with Stephen Dillane, who plays Stannis?

CVH: “I really like working with him because he’s so unpredictable and there’s something so stern about him. Liam [Cunningham] explained it really well, actually. He said, ‘He doesn’t give a damn about being liked by anyone.’ And that’s what makes him so cool and so very authentic in a way. He’s a sweetheart, but there’s something about him, you cannot really ‘get’ him. And especially to be in that triangle with Liam and him, that trio is so interesting because those men couldn’t be more different, and yet, they get along so well and they make me laugh. It’s like Laurel and Hardy. We joke, the three of us, we joke about doing a fun spinoff called ‘Melissa, Dave, and Stanley.’ A light-hearted supernatural rom-com.”

Q: Over three seasons what has been your toughest scene to film?

CVH: “The very, very first scene I shot ever on this show was the burning of the idols on a beach.”

“You can’t see when you’re watching it, but it was freezing cold and the wind was coming inland from the sea. We were in Northern Ireland in November or something, and it was freezing cold. It was my first day and I had to speak to all these men, as a completely secure woman who has no doubts whatsoever; she’s completely committed. It was so different from all the nervy wrecks that I’ve played before! I couldn’t put any thermal underwear on because the dress was really thin and I just hardly remember any of it, because I was trying to basically stay alive and then say these lines.”

Q: I assume it’s got easier since then?

CVH: “Yes! And being around Liam is just a joy, always. He makes me laugh so much. We’re enemies on screen but in real life we’re really good friends and we’ve known each other for five years. We’d actually done another film together where we were lovers. We played the complete opposite to our roles in Game of Thrones in this film called Black Butterflies.”

Q: What’s it like when new characters come on board?

CVH: “Well, I met the guy who’s going to play Oberyn [Pedro Pascal]. And so I imagined coming in on the fourth season, after three seasons and with people talking about his character, and who’s going to have to play it – I felt for him. It’s like, when you’re in high school, the first grade and you feel a little responsible for the little kids. I could feel his nerves, I could understand why it would be scary.”

Q: Is part of the nerves coming into it that you’ve got a character that is already known and loved by all the readers of the books?

CVH: “Yeah, it was for me in the beginning, definitely. People were speculating, who was going to play Melisandre? Is she right for it? She’s not pretty enough or she’s not fat enough, or she’s not tall enough, or she doesn’t have green eyes, whatever. But then I noticed on Twitter all these followers all of a sudden, so many people. So even though they may hate me, at least they like to hate me, I guess. And of course I cannot please all of them.”

Q: And what sort of fan reaction do you get?

CVH: “There are people that love that character–for some Melisandre is their favourite character, which I can hardly believe! I guess it’s the fact that she’s a woman and so strong, and she has that magical power. I think that’s attractive in a way.”

Q: How do you approach the more explicit scenes Melisandre is given?

CVH: “It’s definitely not my favourite thing in the world. But if the scene is great, I don’t see the problem. I accept it, because I’ve worked with Paul Verhoeven, who I always describe as an intellectual with a dirty mind. And also it’s to show that that’s how the world works. It shows how weak the male flesh is, and how manipulative women can be.”

Q: Watching Game of Thrones it feels like everything is on a vast scale. Is that how it feels to be in it?

CVH: “Yes. I mean, the world becomes smaller because you get to know people more and more, but at first, you don’t even know where the camera is–it’s so big, which is a little overwhelming. Look, even now I cannot even believe that I’m part of this. It’s so cool; I really don’t want to die!”