Every single year I miss the San Diego Comic-Con and every year I regret it. Basically all the coolest TV shows, filmmakers, and comic book creators meet up, spill the beans on their new projects and every geek in attendence freaks out in anticipation.

This year the Lost panel discussion didn’t seem like such a big deal to me, and I wasn’t interested in a lot of the bigger names attending – I just wish I could have been there for the screenings of the Bionic Woman and The Sarah Connor Chronicles TV shows, Rogue & Focus Studios Doomsday chat with Neil Marshall, the 30 Days of Night preview, and of course, Smallville screening and Q&A.

But all of that pales in comparison to the buzz surrounding Johnny Depp starring in Sweeney Todd, director Jon Favreau talking about Iron Man, and director Zack Snyder discussing Watchmen.

There’s just too much to get excited for, and I’m not even going to get into the fact that there was more buzz about J.J. Abrams‘ untitled flick that’s been dubbed Cloverfield.

Anyway, for now here’s the poster for Sweeney Todd. Enjoy! 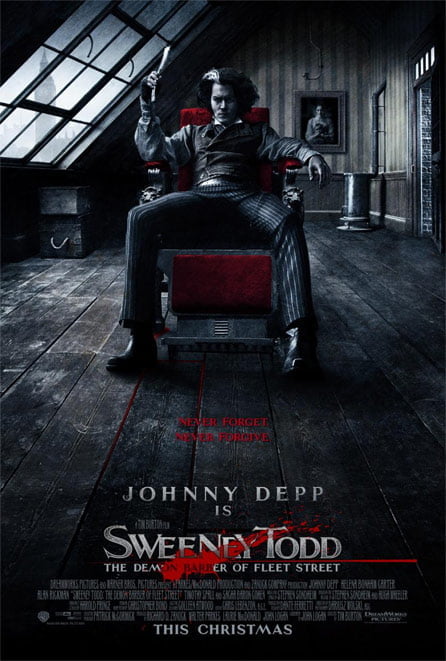