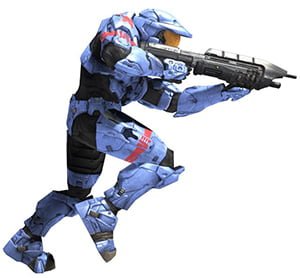 During the madness of the Toronto film festival I was lucky enough to take a three-hour break thanks to the gang at Xbox. The break meant three hours, holed up in a hotel room with a big screen TV and a copy of Halo 3. That’s right, three hours to give me a taste of what the game is like, some of the story elements, and as much information as I wanted to see from any point in the game (I decided I’d rather play the game through than find out how it ends).

The catch is that I can’t reveal anything about what I learned until this Sunday. So, while I can’t really tell you much about specifics in the game, I can at least say that it seriously kicks ass. Even with three hours I didn’t get enough of an idea quite yet how well this game stacks up to Halo 2, but I’m comfortable saying that the peek I got has me craving much more.

And then there’s the marketing campaign – brilliant. Love the music, and the whole “Believe” website and videos that have been running, and the diorama concept. (Although I still set the advertising bar by the Gears of War spots that featured Gary Jules’ version of “Mad World”, but these are obviously a notch better.)

As an Xbox fan I’m also excited because Halo 3 is totally going to own the Holidays, and it’s going to also get a lot of new Xbox 360s into people’s homes. The only thing I’m not convinced about is why anyone would pay to get one of those ugly Halo 3 edition Xbox 360s. But that’s another story.