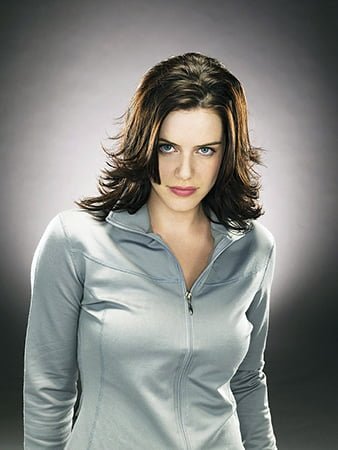 Anyone else feel kind of bionically unimpressed with last night’s Bionic Woman premier? I had been pretty excited about the concept for the show, and while I’m willing to give it a chance since last night was just the first episode, I expected a lot more.

It’s everything you could expect, if you know the original story. Michelle Ryan plays Jaime Sommers, a woman who ends up in a horrible accident and wakes up to discover that her boyfriend, Will (Chris Bowers), has taken her to a secret laboratory that “upgrades” people. This is a surprise to the secret organization running the lab, but they realize since their last creation failed, maybe Jaime can be their new operative. At the same time their original creation, Sarah Corvis (Katee Sackhoff), is out there and wants to kill Will.

Now that’s all fine and good. It’s not a bad story, although there’s a lot of boring dialogue, but one of the problems is that the show just looks awful. The camera work is adequate at best, there’s no style in the editing, the special effects are ridiculous (they actually remind me that, really, Smallville is pretty great at doing super power effects). On top of that, the actors are poorly directed and a bit boring and there are a few moments that just don’t make any sense (i.e. it was funny to see Jaime walk into the women’s bathroom at the packed club where she works, and find it completely empty).

I’ll keep watching to see if they can fix the show, but so far I’m underwhelmed. Nothing outstanding, except perhaps to say that the cast looks good and they have the right concept, just really poor execution.