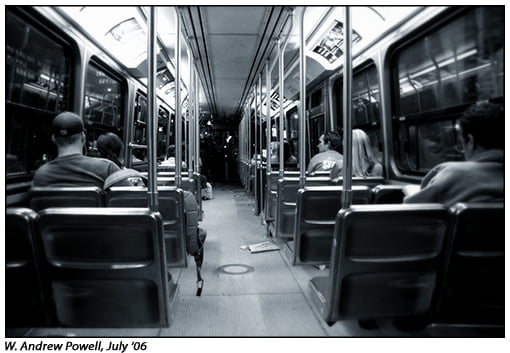 There are very few days in the year when I’m not on the TTC at least once. On a regular basis I spend at least 40 minutes on a streetcar or in the subway, and I have to say, there are also few days where I don’t have issues with the TTC.

For one thing, I can’t tell you how many days of the week I’m on a streetcar headed home and they decide to short turn, forcing everyone off to wait for another vehicle. Most of the time when I get on the streetcar it says it’s going all the way to the end of the line, and then they get an update part-way through the trip and all you can do is groan.

It’s technically not the drivers fault, but they end up being so stand-offish about it that you can’t help but loathe them for it too.

What I can’t imagine is how short turning is a good idea. In most of the cases I’ve seen they short turn within a 10-15 minute ride of the end of the line. And there are always at least 20-30 people onboard.

I can’t imagine how customers get abusive with drivers, but that said – the TTC doesn’t help the cause by behaviour that treats the customer like second-rate citizens. The idea that the TTC continually thinks this is fair treatment, and an acceptable practice, is ridiculous. Especially when most of the short turns that I’ve seen happen between 8:00 AM and 6:00 PM – also known as rush hour, the one time you’d think the TTC would be prepared.

Ultimately, I don’t care what excuse they have, I just want it fixed. The streetcars are always packed on the 504 line, the traffic is a mess, and there’s no reason to make the ride even worse by making a person’s commute even longer.

Ed Drass, who write for Metro Toronto, had a piece about customers on the Queen line being upset about this same issue, and I hope they’ll realize it’s a city-wide problem. If the TTC starts discussing 501, they should take a look at all of their streetcar lines. In my books there is absolutely no reason to short turn and dump customers on the side of the road unless the road is actually closed. If the TTC wants to serve their customers properly, and stop inciting anger from their total disregard for their customers, they should start with issues like this.

I’ll also happily add that if the TTC is committed to having streetcars in the city, they need to make room for them. Specifically, I think they should convert portions of all the streetcar lines to transit only lanes and get rid of street parking in those areas. I can hear all the car-drivers complaining already and I really don’t care. This city focuses far too much energy on drivers and needs to pay real attention to public transit instead. Especially since I’d wager that a huge percentage of those drivers are coming from outside the city border from that hellish local known as the suburbs.

Have your say on the issue over at Spacing and you can head over to SteveMunro.ca for other discussion on Toronto’s transit.

What does the future hold for North x...

As an occasional visitor to Toronto I enjoyed riding the system, one of the world’s best. But, unlike Gatekeeper, I rarely rode in the peak hour. The major problems as I see it are traffic congestion and the timetables. The timetables probably don’t allow for the congestion that has developed over the years, so the trams cannot adhere to the timetable. This results in trams being turned short, so as to regain their ‘slot’ and make another trip. Should a tram with only 20 or 30 people continue to the end of the line when if it returns to the start it can pick up another 150? And if another tram is following shortly, is it really so bad to wait for a minute or so, to join the 20 to 30 passengers on the next tram and go to the end of the line? Either the short turns should be timetabled, or the roadside regulators should only turn trams when there is another immediately following.
Adjust the timetables? This effectively means that capacity is reduced, at the time when maximum capacity is needed. Reduce congestion? Lovely – but does TTC control this? Other systems, such as Melbourne, have a policy of keeping so far as possible other traffic off the tram tracks – even a policy of abolishing left turns across all tram tracks would be a major help. And prohibiting other traffic on the tram tracks from 100 metres before a stop would be a godsend in allowing trams good access to the stop.
TTC also needs to expand the number of trams. If they are less crowded (by reason of there being more) then they will take less time to board and alight, and travel speeds will be increased. The best way to do this is not to replace the existing fleet, but to buy about 250 lightweight trailers, which can provide the low floor access desirable for disabled passengers, and tow them behind the existing trams. This will be far cheaper than buying new trams (though these will be needed for the proposed extensions). Trailers need no extra staff, are unpowered, and are comparatively cheap to buy – no motors, no expensive power electronics. Ticketing? Rule that only persons holding a travel pass may use the trailer – and have occasional swoops on the passengers there to check validity of passes, and fine (very heavily) those without valid passes.
At once the system is speeded (quicker to board and alight through all the extra doors), renders the existing fleet Disability Law compliant, reduces crowding, and quite possibly the extra space and greater speed results in greater patronage – hence greater revenue!
Go to it, TTC

Lately, this short turn thing has become a huge problem for me on TTC buses, not street cars. I ride the same route, every day to work and back, from one point on east-end eglinton, to another on west-end eglinton. It’s a straight line. Occasionally, I don’t mind when the bus kicks us off, provided that there’s another bus going the same way just behind us.

However, the problem is growing, to the point that twice on the same route, I was dumped on the side of the road with no explanation and no prior indication (I made sure) that the bus was or would become a short-turn bus. As I said, normally I don’t mind, so long as there is another bus close behind us to take us the rest of the way, but when it’s closer to the west end, in Etobicoke, the buses don’t run as frequently.

The other night, I was kicked off about 3 stops from my home, in the rain. Again, there was no explanation, and with no alternative, I was forced to walk the rest of the way. In the full 20 minutes it took me to walk to my apartment building, no bus passed me, continuing the route. I know the bus schedule, and there ought to have been another bus within half the time it took me to get there. I can only imagine that a second bus on that same route was transformed into a short-turn bus, and my hopes of catching another bus on that rainy night were in vain.

This short turn problem is only one part of the issue. Earlier in the summer, I encountered several instances of buses which simply did not arrive, bus drivers who changed their marquis to read “not in service” moments before passing a stop full of people waiting specifically for THAT bus.

[…] That’s the list for now. Next time I’ll roll out some more. In the meanwhile, here’s a couple good links that I recommend: TTC now just ‘hick town transit’ Free transit touted elsewhere, but not in Toronto Suffering the TTC […]