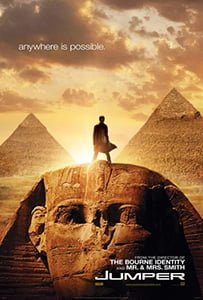 Check out the trailer for the film Jumper over at Apple.com and tell me what you think. My first instinct is that it’s just another dumb action-type thriller, but I was impressed with a couple of things.

First of all, I love the cast. Hayden Christensen, Samuel L. Jackson, Diane Lane, and Rachel Bilson – not a bad start.

Next, it was directed by Doug Liman, the guy behind the The Bourne Identity series of films, and who also did a decent job with Mr. & Mrs. Smith.

I’ll admit I love this kind of action movie, when it’s done right, but after so many crappy movies in 2008 I’m a bit jaded now. I also have a bit of a love/hate relationship with Christensen.

Should be good. Diane Lane can do no wrong in my book.

the film was good but its very short, i didnt expect it to end where it did