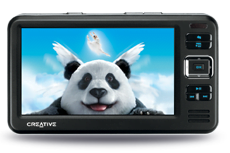 Don’t have enough fun on your hands? Want to play a game that will consume your days? Try this one on for size: walk in to any electronics store in the United States and try to buy the second generation, 80 Gb Zune. It sounds easy enough – the new Zune was released on November 13 – but as anyone who has tried can attest, it’s practically Microsoft’s impossible mission for ’07.

As a Canadian, my hunt for the brand new Zune is even more annoying because I can’t just order it online. Amazon.com and all of the other online retailers don’t ship to Canada, and as I’ve said before, I refuse to settle for one of the smaller Zunes or the dreaded iPod.

In talking to a Canadian PR rep. for Microsoft I also don’t have any info about when, or if, the device might come here. It’s one of those wait-and-see situations that I’m not patient enough to wait on.

The only odd development is that Microsoft said over 10 days ago that we’d see new shipments in stores by now, but a close source (i.e. my girlfriend, Aisha) was in New York and couldn’t find any over the last few days and was even told by the Virgin store in Times Square that they have a memo forbidding them to sell the units in their stock room until December 1.

Whatever is going on, it’s annoying. Microsoft shouldn’t have even debutted the model until they had enough to ship. If they had been really smart they also would have debutted even a mini-Zune in Canada by now – they obviously have enough supply of those.

I’m still dying to get my hands on one, but at this point I think I may have to resort to eBay, much as it pains me. They seem to have a number of the 80 Gig models for sale, and at this point, I’m tired of waiting.

There are alternatives though. The Archos 605 and the Creative Zen Vision W are both pretty decently priced. Maybe it’s about time to just give up on the Zune wait… I’ll keep you updated.

[…] The Zune gameThe Gate, Canada – 1 hour agoTry this one on for size: walk in to any electronics store in the United States and try to buy the second generation, 80 Gb Zune. It sounds easy enough … […]

Hey (i’m in the US)
I ordered mine 2 days ago on zune originals website. It’s shipped yesterday, directly from china. Sounds like they really don’t have much stock on the American soil.
Sorry for you situation. and good luck!!

Dreaded iPod? LOL!
Why dont you stop torturing yourself and buy one of the ‘dreaded; ipods – they are just a bit better than the zune, can be used as a hard disk etc.etc., play all types of files, works with all systems.
Foolish prejudice leads to no music player for you. How silly is that?

I won’t deny that you’re right, Walter – the iPod is the top of the line. However I heard so much about iPods breaking (and I had a friend who had to replace his) that I don’t want to bother. The other offense I take is that you have to use iTunes. My computer is stuffed with software – I don’t need any more. Since the Zune works with Windows Media Player – I’d prefer to go with that.

hey GateKeeper!
you’ll have to install the zune software to sync the zune device with the computer.
zune doesn’t work with windows media player!
so, whether you buy an ipod or a zune, you’ll have to install a software!
and don’t forget that since you’re in Canada, you won’t be able to buy songs from zune marketplace. So I hope you have a lot of cd’s, because zune doesn’t accept other protected formats (forget plays for sure and fairplay music, and forget online stores…) except those that are sold through zune marketplace!
I’m Canadian, and I have a zune. Even if I can’t Technically fill my zune with legal downloads, I don’t regret my purchase.
(My solution: I use softwares that break protected purchased songs from Itunes and Napster.)

Whats wrong with iTunes? It works on win and mac, and you dont have to buy music from Apple – in fact, the iPod/itunes combo will play almost ANY format.
If its price, pick up a used one.

Just get an ipod and be happy – its listening to your music easily that counts – and the zune just doesnt cut it.

For a Canuck, the zune is a waste of cash.

Ugh – I forgot Zune had the software too. That does kinda blow, but the Zune still beats the iPods in another way – 3.2″ screen, versus 2.5″. I care a bit more for video play than music – in that sense the Zen destroys both unites with its 4.3″ screen. We’ll see.

In Canada, we don’t need to buy music. Downloading for free is legal here. The Zune also has drag and drop so you don’t need the Zune software. Everybody has an ipod in Canada because they have a monopoly here. The ipod is the only mp3 player that you can buy here that has a half decent amount of space. The zune is so much better with the bigger screen and the touchpad. People are getting ipod thumb from going in circles all the time. Expansys.ca has the zune 80 ready to be shipped at $250 CDN so you can try there, but I don’t know how much you want to trust that.