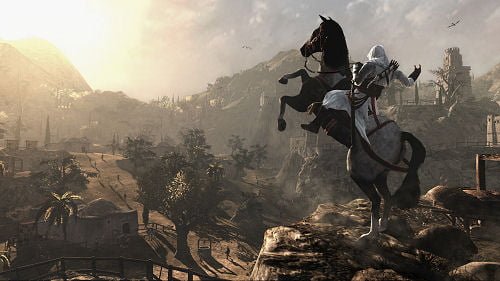 Now that I’ve completed the game, I have to ask the question that’s been on my mind for weeks: how can a company like Ubisoft screw up a concept as awesome as Assassin’s Creed? I’ve been playing it off and on since I first got it, never really feeling like I was dying to play it, but knowing I had to complete it. And now that I’m done I look at the time I spent playing the stupid thing, and the only thing I appreciated was the occaisonally great graphics, hopping across roof-tops, and the fighting system.

From the clumsy use of a great concept, which basically gets blown within a few minutes of starting the game, to a been-there-done-that storyline, I just couldn’t find much to like about the game.

I also can’t see myself getting very excited about a sequel, which this game signals for near the end.

Ubisoft is a great Canadian company, and they’ve done some good in the past, but come on, this isn’t even close to what I would ever call their best work. With such a big world to explore, and lots of enemies, I expected to be able to do more than leap along building tops and kill people. Give me some depth and stop making me tip-toe around every fricken guard.

I’m off now to go replay a great game by another Canadian company that really knows their stuff: BioWare and their ridiculously addictive Mass Effect. Take notes Ubisoft – this may not be the same genre as Assassin’s Creed, but the elements that make a great title are all there: great story, room to explore, lots to do, and an ending that actually makes me feel like I accomplished something.