Brad Renfro: The trouble with Hollywood 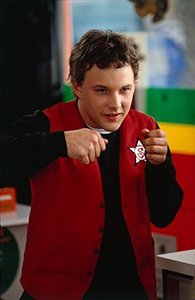 There have been a lot of reports today on the death of former child star Brad Renfro, who was found in his apartment in Los Angeles, and I think there is a lot that can be said about Hollywood from it. I’m going to leave the commentary on this one though to author and GATE writer Christopher Heard, who sent this note in this morning:

I was shocked this morning to read of the death of young actor Brad Renfro. Shocked because after spending a morning with him interviewing him and then having lunch with him several years ago I thought for sure that this guy was, as I wrote in my notes, “an actor that is right up there with River Phoenix in terms of the sophistication of his talent at such a young age” – little did I know then that the comparisons to River Phoenix would go a lot further than just his onscreen charisma and his acting instincts. Pheonix dropped dead of a drug overdose at 23 – Renfro waited until he was 25.

When I met Renfro I knew nothing really about him. I knew he was a young kid plucked from obscurity in Knoxville, Tennessee after a mass talent search to co-star, at age 12, in the big budget John Grisham adaptation The Client opposite the likes of Susan Sarandon and Tommy Lee Jones. I met him after his impressive turn in the film based on the Stephen King novella called Apt Pupil in which he starred opposite the towering talent Sir Ian McKellan for director Bryan Singer.

Interviewing child actors is always tricky. I interviewed Elijah Wood when he was a young kid and he was delightful, I interviewed young Haley Joel Osment in Boston after he made A.I. and I left that interview saddened by what I saw. The kid was exhausted but surround by agents and publicists and his father all of whom were urging him to keep going doing more and more interviews even thought the kid was clearly beat. I remember thinking that this poor kid was a cash cow for those people in the room and their regard for their young charge was based largely on that. Elijah Wood made it through okay and is now doing adult roles, Osment has not fared so well.

That last part is, I think, a fair assessment of a large portion of the child actors who are working in the industry. Some get treated fair enough, but many of them get run through the machine and spit out at the end. Renfro’s story is another sad one for the pages of Hollywood tabloids, and it’s completely unnecessary.

For more on the story, head over to The New York Times.

Photo of Brad Renfro from the film Ghost World.

Reminds me of another talented young actor River (Phoenix) who died way too soon. Heartbreakeing. Hopefully hollywood can wake up and save such talents before another tragedy happens such as this.

I’m highly skeptical of Christopher Heard’s claim that Haley Osment was ill-used by his father and associates. I’ve always heard the opposite. I have also met young Mr. Osment, and my impression was that of a bright, capable young man who is in the business because he wants to be, not because anyone is milking him.

As for the comparison to Elijah Wood, he and Osment are hardly contemporaries. Osment is the same age now that Wood was when he was filming LOTR. It’s too soon to say that he’s been “spit out” by the industry. Right now, he’s a college student, doing his own thing in his own time. He’s an actor, and he’s not done yet, nor is Hollywood done with him.

Renfro had a troubled childhood and drug exposure even before his discovery. I think the evils of Hollywood on child actors is overstated. We only hear stories of the trouble actors like the Different Strokes kids because a story about the good kids who grow up to become mathematicians and invent theorems (Danica McKellar) are rarely mentioned.

A lot of the problems these young actors have can be traced straight back to their upbringing – or lack there-of. All you have to do is look at Britney and Lindsey right now, and the fact that their parents would either want to be their “pal” or ignore them altogether.

And as for Elijah and Haley Joel not being contemporaries, what’s that got to do with anything? They really aren’t that far apart in age (Elijah’s just turning 26), but you never hear about him doing any of the asinine stunts that would wind most of these other kids up on the cover of the Star or as a feature blurb on The Insider or Access Hollywood, now do you? If you want an example of one of his contemporaries though, take a good look at the mess Macauley Culkin’s made of his life and career – he and Elijah have even acted together, and you couldn’t find two more different people.