How do you spell Scrabulous? I-L-L-E-G-A-L 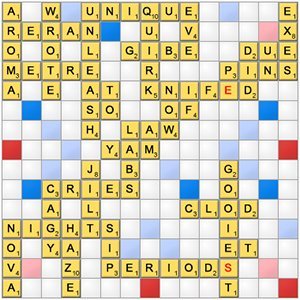 This debate is what I would call a no-brainer.

Scrabulous is one of the most popular applications run on Facebook. It boasts close to 600,000 users a day, and as a user myself, I can tell you I’m on it at least a few times each day. And for those of you who don’t know, it’s the illegitimate cousin of Hasbro and Mattel’s famous game, Scrabble.

Obviously, that can make for an issue, and in reports hitting the web today, it seems that the toy makers are telling Facebook to remove the application or face legal action. Also quite obviously, this is a move that they have to make. Under Trademark and Copyright laws you have to defend your work or risk losing your rights.

But there is something much, much bigger going on here. When was the last time any of you played Scrabble using the legitimate board game? I haven’t touched one of the boards in about 8 years, and yet I’ve played Scrabble a number of times since just late last year.

For any company to want to destroy something as popular as Scrabulous, well, you have to wonder what’s going through their collective heads. What makes more sense is to piggy-back that success and use it for their own gain.

Facebook obviously doesn’t want to loose this application since it keeps eyes glued to their site. The Scrabulous makers don’t want to lose all their hard work, and could make themselves legitimate with a deal between themselves and the toy makers. And Mattel and Hasbro bring a huge audience to a game that can be popular again.

I don’t know how all this will work out, because legally Mattel and Hasbro have every right to scrub Scrabulous from the face of the Internet, but it’s just a really dumb move. Perhaps the fan movement on Facebook can still save the beloved game, but it’s going to take some deals and smart decisions to save the game.

Read more on the issue over at BBC News.