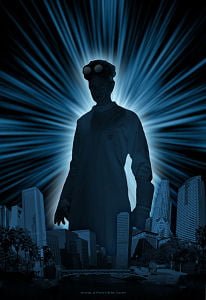 As a TV junkie, I can’t help but be a fan of Joss Whedon. Between Buffy the Vampire Slayer and Firefly, he’s done some pretty cool stuff, but this one takes the cake.

If you haven’t heard already, Whedon was bored during the Writers Guild strike and apparenly wrote a three-part musical comedy called Doctor Horrible’s Sing-Along Blog that is going to appear only online. The mini-show stars Neil Patrick Harris as Dr. Horrible, a loser of a super-villain who keeps getting his butt kicked by the hero Captain Hammer, played by Nathan Fillion. He’s also hopelessly shy with girls and can’t seem to bring up the nerve to talk to Penny, the girl at the laundromat, played by Felicia Day.

The only downside so far is that the each episode in the series is just 10 minutes long.

Joss, you had me at NPH.

You can find the official site, which currently has nothing on it but the picture of Dr. Horrible, at www.drhorrible.com. You can also find an amusing fan site at www.doctorhorrible.net.