Flip Video: Cool cameras you can’t get your hands on 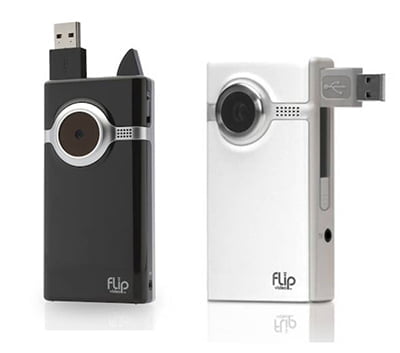 Over the last few months I’ve had the pleasure of using Pure Digital’s fantastic little video cameras on multiple occasions. I had a tester unit early in the year that I used to cover the MuchMusic Video Awards. I then bought a camera through Dell to cover the Toronto International Film Festival in September. And I’ve shot stuff just for fun, just because I could.

It’s a brilliant device aimed at people who just need the basics and don’t need the best video quality. I’ve heard of countless journalists turning to the portable devices so they can write about a story and also get a bit of video for their publication’s website.

Let me be clear, the video quality is good at best, but it works amazingly well in dark conditions, picks up most audio fairly clearly, and it’s so small you can take it anywhere and capture up to an hour of video.

Of course, with this sort of thing there is always a catch, and in this case it’s all about borders.

If you’re in the United States you can walk out and buy one, or order it online, and that’s it. Enjoy. Elsewhere, including Canada, it has historically been incredibly hard to buy one. Dell Canada and Wal-Mart stores are supposed to carry them in Canada, but Dell hasn’t had them listed online since early October, and I have as yet to find a Wal-Mart that ever has any stock in.

The news out today though might make this the start of a good news story. You can now walk in to Best Buy and Future Shop and pick up the Flip Ultra. There is also an upgrade coming for the software that will give users a lot more features, including integrated uploading to YouTube and MySpace, and the ability to add titles and credits.

But the bad news for Flip Video fans is that Pure Digital is launching a whole new camera, the Flip Mino HD that is smaller than the Ultra, includes a built-in rechargeable battery (the Ultra takes AA batteries), and captures HD quality video. While you’ll finally be able to get your hands on the Ultra, thanks to the two new stores that are carrying it, there are currently no details about if or when the Mino HD will be available.

As their website states in the FAQs, “The Flip Video Mino is only available for purchase in the United States and cannot be shipped internationally due to licensing agreements. We do not have an ETA of when our products will be available for general retail distribution.”

I understand that licencing can be a lot of trouble, and this isn’t the first item to get held up by red tape, but distribution will either make or break the Flip line of cameras. Especially considering how much competition is out there now in the video market. The Flip cameras have the best price, coming in at $230 for the Mino HD and $150 for the Ultra, but they are literally losing their momentum every day the Mino is not available worldwide.

The Ultra is great, don’t get me wrong, and new distribution is a fantastic thing, but if you know the Mino is out there, not to mention the Minio HD, is it as appealing?