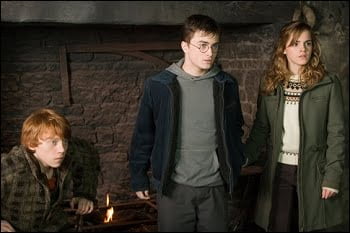 Harry Potter and the Order of the Phoenix

“When Daniel, Rupert and Emma were first cast as Harry, Ron and Hermione,” Jeff Robinov, President of Production, Warner Bros. Pictures said, “we knew they were not only talented, but had a very special chemistry. Through the years, and in each of the Harry Potter films, we have watched them grow into extraordinary young adults, as well as remarkable actors. It would be inconceivable to imagine anyone else in the roles with which they have become so identified, so we are thrilled and proud that Daniel, Rupert and Emma have chosen to complete the arc of their characters in the final two films.”

In the official release from Warner Bros. Watson stated, “I could never let Hermione go–she is my hero! I love her too much and love what playing her has meant to me. I am excited and honoured to be finishing what I started and playing her in all seven of the films.”

J.K. Rowling‘s beloved series started off back in 1999 with the release of Harry Potter and the Philosopher’s Stone, which became a film in 2001. To date the films have reportedly taken in over $3.5 billion in worldwide ticket sales alone.