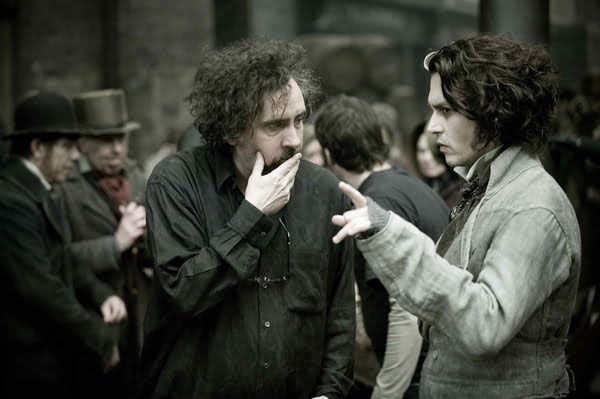 Tim Burton and Johnny Depp on the set of Sweeney Todd

A collection of links to some of the most intriguing news bites on the web, including: Depp and Burton to remake Dark Shadows, Shania Twain may make an appearance on American Idol, Dancing with the Stars announces the next cast of celebs, at least three more Spider-Man movies are in the works, Shahrukh Khan discovers American irony, and Katy Perry reveals that she prayed for big boobs. No kidding.

Tim Burton and Johnny Depp have revealed that they will team up once more for a movie version of the strange 1960s soap opera, Dark Shadows, with Depp playing the vampire Barnabas Collins. According to Starpulse.com, Burton has also confirmed that work is already under way.

It’s unconfirmed so far, but People’s TV Watch suggests that country singer Shania Twain could be sitting in on upcoming American Idol auditions in Chicago. Road trip, anyone?

Other confirmed celebs for the next season of the show include Mya, Macy Gray, Aaron Carter, Donny Osmond, Melissa Joan Hart, Kathy Ireland, and Natalie Coughlin, to name a few.

The fourth Spider-Man film has been greenlit for release in 2011, with the current cast on board, but it looks like Sony is also planning ahead for the fifth and sixth films, which will go ahead with or without the current team. In other words, if Sam Raimi, Tobey Maguire and Kirsten Dunst are not back after number four, the franchise will get a reboot courtesy of writer James Vanderbil, who helped write the fourth film, and has been signed on to pen the latter two as well.

Famed Bollywood star Shahrukh Khan is trying to downplay a recent error in New Jersey’s Newark International Airport, which had security pull him aside and question him for over an hour. What makes the story truly sad is that Khan was in the United States promoting his new film, My Name is Khan, a film about racial profiling in the U.S..

You have got to wonder about this one, but according to the UK’s The Sun, Katy Perry once turned to prayer in the hopes of receiving sizable endowments.

“I remember really vividly kneeling by my bed as a nine-year-old, saying my prayers and asking God to give me boobs that were so big that if I laid on my back I wouldn’t be able to see my feet.”

“Eventually that request was granted. A bit of divine intervention displays the power of prayer!”