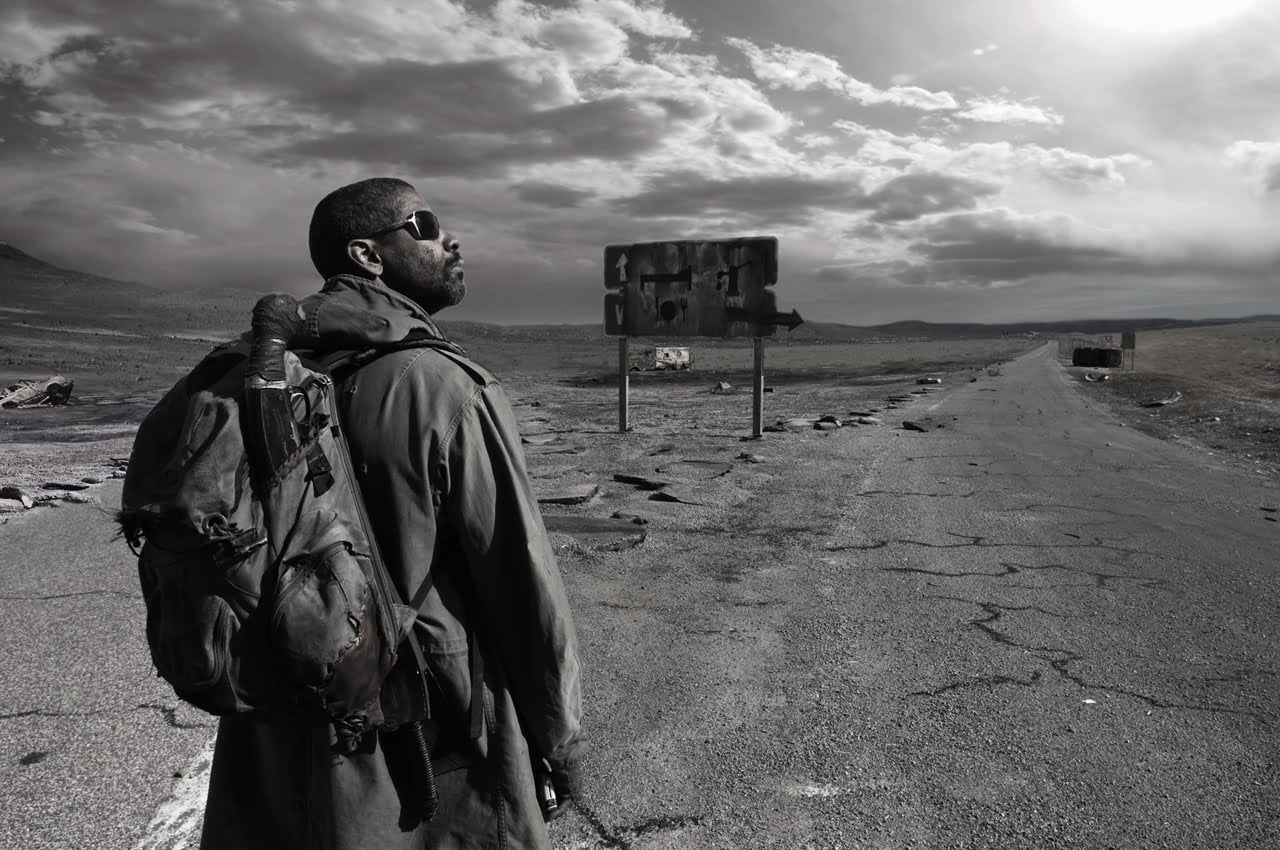 Today felt like a very long day, made all the longer by what I can only call an exasperating movie.

At 7:30 tonight I was at Warner’s public screening for The Book of Eli, which stars Denzel Washington as a religious wanderer with a crazy kung fu grip. The story falls under the usual “post-apocalyptic America” plot where a long-forgotten war has left the country, and most likely the world, devastated and practically unlivable, which effectively ends all civilization as we know it.

While the film was sometimes quite cool, especially when it was being all kick-ass and dystopian, and while I even enjoyed Gary Oldman and Mila Kunis, The Book of Eli is really the definition of disappointment.

I’m not going to get into the whole review now, I’ll save that for tomorrow, but the story is interesting, I won’t lie. Apparently Denzel’s character is walking around with a Bible, and he’s also possibly the long-lost son of Jason Bourne because he can take down a team of thugs in under 30 seconds.

This Eli guy is all weird and brooding, sometimes spouting off well-known Bible verses now and then just to show that he’s more than his muscles. But when the fight gets serious near the end, the storyline backs down and changes tacts. It also sputters along at a snail’s pace most of the time and ends with one of the most ridiculous closing scenes that just doesn’t fit with the film at all.

To me at least, it felt like they ran out of ideas when they made the film, so they went to a comic book store and asked the first random weirdo inside to end the story for them. That’s the only way I can explain the completely bizarre, “I-don’t-believe-it-and-yet-I’m-seeing-it” sort of resolution that they came up with.

My recommendation for you is just to skip the film and watch something else this weekend. Maybe go see Avatar for the fifth time, or check out Moon on Blu-ray. No matter how cool the fight scenes are in the beginning of The Book of Eli, they’re just not worth the frustration of the ending.

You’re supposed to be a critic?
I got the feeling the movie wasn’t supposed to be strictly an action thriller at all. It was a movie with a message. It’s a statement about the state of the world as it is now. When I realized the nature of Eli’s book and the antagonist’s reasoning for desiring it, I literally got chills. Virtually nobody has ever even so much as mentioned the issue of misinterpretation, neglect, and misuse of the basic ideals of religion in favor of using it as a political tool or “weapon” in society.
Message aside though, I felt that it was still a very well made movie, but I’ll admit that if you don’t dig deeper into the plot than what’s given to you, the scenes that are supposed to open your eyes metaphorically just end up making you close em literally.
I’d definitely watch this for a 2nd time over Avatar 3D IMAX insert-gimmick-here.
Don’t get me wrong, though, avatar is a 10/10 movie!
My verdict is that you have to at least have a drop of spirituality in you to fully appreciate this movie.
And a drop of religious skepticism.

Well, everyone is a critic. The only difference between good critics and bad critics is generally how many films they’ve seen. I’ll never claim to be the best critic in the world, but I’ll happily talk movies with anyone. Just because we differ on movie tastes though doesn’t make one of us the better judge of film.

That said, the concept of religion as a tool, or a MacGuffin in this film’s case, is rare, but that doesn’t make the film stronger. There’s simply very little subtext and the script doesn’t have a deep enough story. Spirituality won’t change that.

Plus, I like great concept films, and ‘The Book of Eli’ had me going for a while, but on top of the weak script, I also thought the ending was patently stupid. Utterly dumb and exactly what I would expect from a stupid action movie. The rest of the film isn’t quite dumb, but the ending doesn’t help disprove that. If you want to see a better example of this kind of film, go watch ‘Children of Men’ or even ‘The Road’.