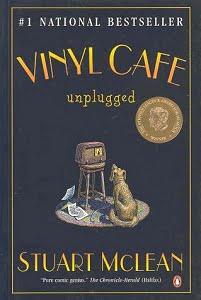 As I was saying before, I’ve been hooked on Stuart McLean‘s Vinyl Cafe books, and as of today I’ve almost read everything that’s out there. The problem is, I don’t know what I’m going to do when I’m done all his books.

There’s something about the way he tells stories that’s just so real. And although most guys wouldn’t admit to this, his little bitter-sweet moments are kinda tough to ignore. I’ve caught myself laughing, followed by almost crying, dozen of times now.

This morning I also caught his show on the radio for one of the first times and I can’t get over his eclectic choices in music. It’s really awesome hearing his little stories mixed in with a lot of artists you’d never normally hear. It also just happened to be an episode with the incredible Danny Michel.

Anyway, I’m hoping Stuart will get a note I sent in asking for an interview for the indiePod but I have no clue if he’s got time or if my note will get passed along sometime this year. Kind of strange, but I can’t think of anyone I want to interview more than him right now.

Stay tuned – hopefully I’ll have news soon. On the indiePod front, I’m happy to say that I’ll finally have a new episode in August now that my bandwidth issues have been solved for a while.