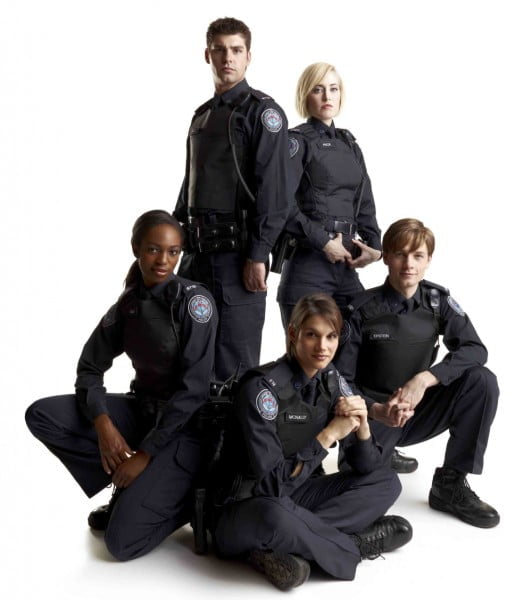 The Cast of Rookie Blue

Not long ago I was lucky enough to visit the Rookie Blue set to interview some of the cast, and tonight I had the chance to watch the first three episodes, which totally hooked me.

It’s one of those great Canadian shows that’s not afraid to show off that it’s filmed in Toronto, even if it doesn’t come out and say it. It’s also a very polished, slick show, with solid writing.

It really doesn’t hurt that I’m a huge fan of Missy Peregrym, who leads the series, not to mention the very cool Charlotte Sullivan and Gregory Smith, but the show is also simply very compelling. From meeting them all, it’s also obvious that the cast gets along very well, and enjoyed making the show, something that’s not always the case.

Anyway, this is basically just a teaser for all the goodies I’ll be posting for the series, which debuts this Thursday on Global and ABC. Stay tuned later this week for video and other interview tidbits.

I happen to love Canadian cop shows/mysteries/police procedurals and this one is pretty good IMHO.

Thanks for making shows that are frequently head and shoulders above what we’re forced to consume down here in the USA.

I’m hooked as well, and I didn’t expect to be when I saw the pilot preview but I stumbled upon it later on and Absolutely fell in love with the show, Andy and Sam are addictive!