Pardon me, but I came for Mr. Shatner 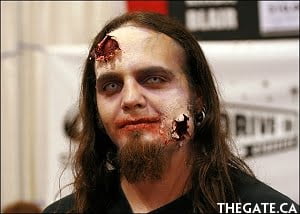 So today was an interesting day if nothing else because of one thing: I attended my first geek convention. The Toronto Fan Expo (which includes the Rue Morgue Festival of Fear, Comic Book Expo, SFX, CNAnime, and Gaming Expo) was at the Metro Convention Centre for the last couple of days and I was pretty hyped about going to get some quotes and photos of William Shatner and Leonard Nimoy (I shouldn’t have to explain who they are).

The thing was, even though I had media access I wasn’t told that it didn’t include access to the Shatner/Nimoy session. Basically, all it included was access to the show floor and autograph areas (and I’m sorry, but I couldn’t care less if some jackass scribbles on a piece of paper for me).

Now, no offense to anyone, but while it’s interesting, and I did get some stuff together to write about (and a very cool Lost Dharma Initiative patch), I was mainly interested in the special guests. If you’re advertising those kinds of people, and you tell me that I have media access to the show, I’m going to start planning elaborate things involving quotes and photos with those people. If you don’t have room/don’t want me in there – just tell me up front. It’s really that simple.

Anyway, it’s all good – I’m hoping to check it out again next year – it’s a huge show and the list of people there is always cool, but now I’m dying to go to a real big geek event… like maybe next year’s San Diego Comic Con!