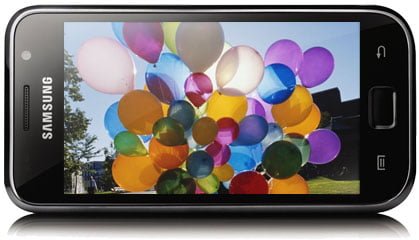 Update: It turns out, after spending an hour on the phone with billing, technical support, and then a customer care agent, that my old “unlimited” email and internet plan was no good on my new Galaxy phone for the HSPA network.

Of course, the big failure here then is the guy who sold me the phone. He said this plan would still cover me for unlimited usage, and in the last week no one I talked to at Bell even bothered to check that.

I’m now on a plan that offers what I consider a measly 6 Gb of data. That should do me fine, but I still feel ripped off, and it shouldn’t have been this difficult to get such a simple problem fixed.

How it all started: I have a story to share about a great phone that has made me a little angry this week. If you’ve dealt with cell phone companies at all in the last couple of years though, I’m betting you won’t be too surprised.

Not too long ago I had the good sense to upgrade my phone and buy a Samsung Galaxy S Vibrant from Bell Mobility. It’s a great phone that I use a lot, and I was glad I upgraded from the get-go.

On August 20 I was contacted by Bell Mobility’s loyalty department though about a problem: I was suddenly downloading data that the system was telling them was from tethering the phone to a computer and using the phone as a modem.

I was a little unsure what was going on – I have an unlimited plan from Bell from a few years ago, so all data usage should be covered, and I have never tethered my phone. I had connected it by USB to syncronize data, but that was it.

They said this charge would be erased because it was clearly a mistake, but they’d have to approve it and I should make sure the phone was not set to tether any more.

I checked the Vibrant’s settings and sure enough, it had tethering on by default so I turned it off. I didn’t hear from Bell again, so I assumed the problem was dealt with.

Today, I had the sense to check my unbilled usage and while I can’t quite understand it, it looks like I’m still being billed for data, and I can tell you, I still have never tethered my phone.

Tethering is off, but I see data items as “pay-per-use.” If you do a quick search, I found the issue explained, and even found Bell’s site referring to the problem.

Now, I don’t know if some staff member at the Eaton Centre store, a corporate location for the record, was using this phone to tether before I bought it from them, or if all the Galaxy’s are being given out with this APN. Or maybe I just had a confused staff member? I’m still waiting to find out if the APN is really a problem at all, but looking at my unbilled usage, I’m betting it is.

If you’re having issues with Bell claiming you have tethered your phone when you haven’t, check your APN settings, but make sure you talk to customer service first before you change anything. I’ll post an update when I have more information, but I just wanted to post this warning while it was all still fresh.

For now I’ll try to keep my outrage to a minimum because I have faith Bell is going to make this right for me, and hopefully anyone else who has had the same issue…