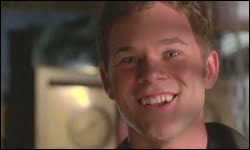 Hey everyone – Happy (Canadian) Thanksgiving. I’m trying to catch up on my cleaning/web work today, but I’ve been a little distracted. Despite CityTV’s scheduling changes for the fall season, which robbed me of Smallville once again, I’ve managed to finally start watching the show again. Ah, the life of the cable-less.

Anyway, so glad to be back into it. I know many would disagree, but it’s such a good show. Pure pulp action – and being a fan of all things Superman doesn’t hurt.

The real surprise for me though was who popped up in the new season… none other than Mr. Aaron Ashmore as… wait for it… Jimmy Olsen. No joke. I can’t think of anyone I’d rather see in that role, it just took my by surprise. As did his role in the show. [laugh]

Now the only trick is making sure I get to watch each episode still.

Back to work – but I’ll have a bunch of updates tomorrow, including the return of some regular editorials on the site.

[Update] I’m such a dork – I originally thought it was Shawn Ashmore – but it’s really his twin brother Aaron. Sorry for any confusion!!