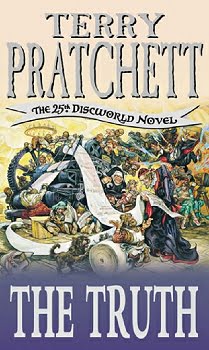 A couple of weeks ago I picked up my first Discworld book by Terry Pratchett. I was looking for a series I could really get my teeth in to and since there are over 30 books, with only the first two books actually needing to go in any particular order (The Colour of Magic and The Light Fantastic), I figured it might be a good choice.

The series is all about this weird world that’s flat and exists on top of the backs of four elephants who ride on top of a gigantic turtle (it’s actually a real myth that apparently has links to Hinduism). It’s populated by strange creatures, including dragons, dwarves, vampires, witches, and wizards… to name a few. And the best part is, the stories are all on the absurd side of things.

From the start I was kind of hooked just because of his choice of completely oddball characters, but I wasn’t wild about the writing. For one thing, he reminded me too much of Douglas Adams, but he wasn’t as good a writer, at least at the time.

The Truth changed that for me though. I was looking for another book to read and stumbled on it – just because it sounded interesting. But it also happened to have a character named William (de Worde) who starts the first newspaper in this weird city, and then I figured I had to read it. And since it was his 25th book the writing was a lot better, but I also really appreciate how Pratchett jumps all over the topic of the press and the media in the most positive way. From free speech to the idea of feeding the presses, it’s all there, and it’s told with a real skill for getting the point across, but still in that absurd style.

Anyway, that’s my latest recommendation from my book list. I’m going to try and read the whole series – if you end up doing the same I’d just suggest starting with the first two books and going from there. It’s not essential, but it explains a few things that make a lot of jokes later on a lot funnier.