So this has been the official week to finally get in the mood for Christmas. After waiting all month for snow I’m finally starting to get into the spirit, even without the fluffy blanket over the ugly barren-looking city (that would be the dirt, bare branches, and such).

One of the first things that helped was going to Stuart McLean‘s Vinyl Cafe show at Convocation Hall. He told two new stories, and there was lots of music on top of it all. I still left at the end and half-expected to see snow falling, but the experience nudged me along just a bit all the same, and Stuart is an awesome storyteller to boot.

And of course I’m finally wrapping up my shopping for gifts (yes, I’m slow), and then I got my care package from my folks in New Brunswick. And while the whole package is a big nudge in the right direction, the dulse I got was the final push.

Don’t ask me why, but dulse reminds me so much of being home (even during the holidays), that it just helped me a lot this year. For those of you wondering what the heck dulse is, well, east coasters tend to like the stuff, but few others. Probably because seaweed doesn’t make everyone’s taste buds get that excited. It’s certainly an acquired taste, but for those of us who’ve been eating it for years, it’s awesome. All they do is take this one kind of seaweed, dry it out on the shore, and then folks eat it. 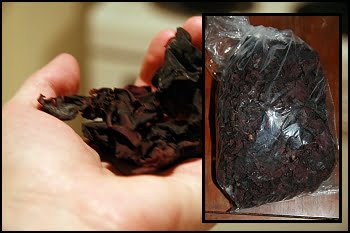