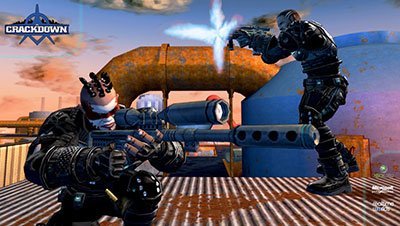 The Xbox folks had an event last night at the CN Tower to promote the new game Crackdown, and initially I just went out of curiosity, but I have to admit – I dig this game.

Played a lot like some of the coin op games I grew up on, Crackdown pits you against a city filled with competing gangs, regular old citizens, and a police force.

I can’t really go into a full review here (I have to wait until later this month to post a review), but it’s a very cool game that lets you just go run around, shoot guns, drive cars, and take down evil gangs. My only complaint might be with the simplicity of it all, but it draws you in very quickly.

The co-operative play option means you can also take on Pacific City with a friend, combing the city for bad guys together, or on separate sides of the city.

There’s also another reason to buy the game – if you pick it up you get access to the Halo 3 multiplayer beta program. That’s right – a chance to get in and play the hottest title of the year as the studio refines it.