Something is wrong with this picture

Tonight was the first night that I saw the new Juno Awards, and I can honestly say I’m kind of appalled.

For the last ten years the Juno Award statue has been an impressive, solid, remarkable piece of hardware that was frankly one of the best looking awards out there, aside from the Oscar. The first time I saw the award, all the way back in 2000, I was a little floored–the Juno had always been ugly, and this impressive mix of metal and crystal was anything but ugly. It was the kind of award the demanded to be raised above the head and brandished like a champion would hold it.

That award is apparently gone though, replaced with what I can only call a cheap knock-off designed by someone who clearly cares more about making a new statement. This newly designed statue that I saw tonight in the Juno Awards media room is a simpler affair: it’s got a basic but impressive looking dark base and on top of it is a crystal block with the Juno logo shape carved out inside. In the photo it doesn’t look that bad, but it doesn’t have any of the presence of the previous statue and it certainly doesn’t make any impression.

Worse still, the new statue reminds me of the kind of trinket you can get made for you at any tacky mall across the country. The only difference is that instead of an eagle of your family portrait, this trinket has a little figure inside, and you’re only likely to see it in a select few homes across the country. 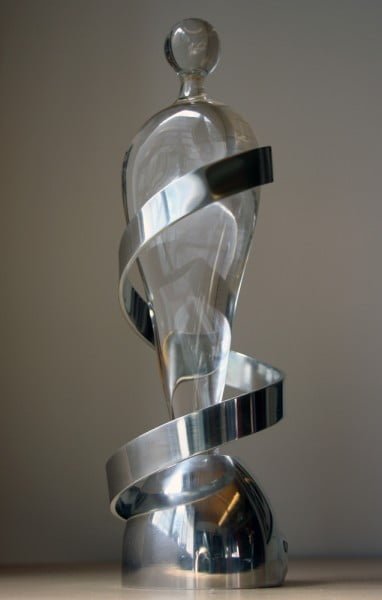