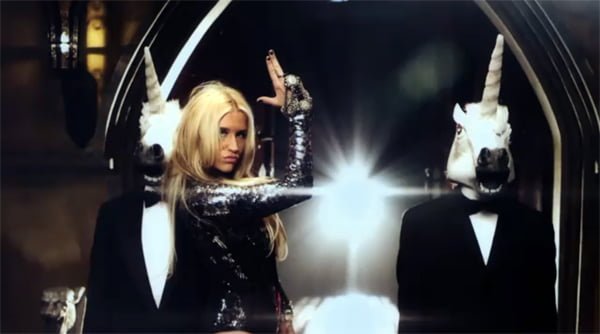 “Blow” has the odd distinction of being one of the few music videos I’ve enjoyed in a long time. No “I’m so cool it hurts” schtick and no rap monologues–it’s tongue-in-cheek, the song is acceptably enjoyable top 40, and oh yeah, it has James frikkin’ Van Der Beek in it.

In terms of sheer WTF imagery, Ke$ha’s video for “Blow” is right out of a sugar-induced dream, especially once James Van Der Beek shows up (or as Ke$ha likes to call him, James “Van Der Douche”).

If you’re not left gawking at the fact that Ke$ha makes out with a champagne-swilling unicorn (standing on two legs nonetheless), then perhaps the visuals of the duo fighting it out with ray guns will impress you. Or how about when rainbows shoot out of the unicorn’s ray gun wounds?