Sucking up to the celebrity trough

This my friends, is a rant. You can call it whatever you want, but for me it’s a rant, and the subject is Mario Lavandeira, better known as Perez Hilton. I saw the guy at the MuchMusic Video Awards on Sunday and I just couldn’t get over how smug he seems for someone who just takes (some people with lawsuits against him would say “steals” I think) other peoples photos and rants about celebrities. Maybe what really bugs me though is how this has not only turned him into some warped version of a celebrity, who gets invited to things like the MMVAs, but also someone who seems to expect corporate-type gifts, and party invites. And every chance he gets he’s ready to belly up to the celebrity trough.

Search for his name and for every mention of praise you find, you’ll probably find two quotes from people who feel ripped off by him. Just one example would be the photographers at the MMVAs who all refused to take his photo, and then booed him as he walked by.

I haven’t personally been ripped off by him, so I didn’t feel too much guilt taking this photo… but I guess I feel outraged enough by his attitude that he deserved a little edit as he sucked up to Hilary Duff. 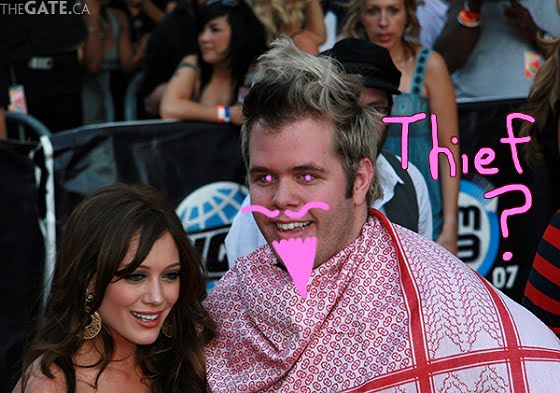 I have to say though that I appreciate the fact that people can blog today and have their say about anything or any one. Perez just crosses so many lines, and expects so much, that I had to comment on this photo and post it. Since Perez has become this weird little star himself it seems only fair that he should get a few comments now and then, right?

Well it’s all true what you said. He totally crosses the line. If you have checked the comments of his visitors, most of them leave negative comments about his teenage style of “journalism” and take sides with the people he bashes. I am also convinced that he thinks (deep down) that it is a shame to be gay. For any shrink it would be a feast to have this guy on the couch.