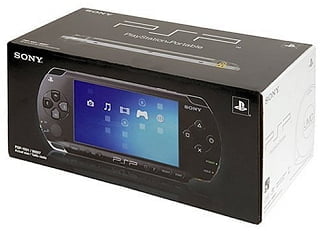 For the last few weeks I’ve been considering buying a PlayStation Portable (PSP), but there’s been a bit of a catch. I can’t find any. Apparently since the price dropped to $199 back before May the PSP has been impossible to find and every EB Games store I’ve called or visited has just said to keep checking back.

I’m still not sold that I’ll use a PSP that much though, even if I can find one. They’re very cool and I love that I can watch video on it and listen to music, on top of being able to play games, but I don’t know how much time I ever have to do that when I’m on the go. It’s better than the Nintendo DS, which doesn’t seem to have any games I’d ever play. Even when I had a loaner DS the best I could say was that there were some great games for those 15-year-olds out there.

Truth is though, if I had my way, I’d rather have a Zune. I want something (NOT an iPod) so I can have more of my music with me while I’m out (my current MP3 player just stores 1 Gb of music), but of course the damn thing isn’t even sold in Canada. Best I can do is go south of the border and buy one… and if I do I’ve got my eye on that Halo 3 Zune from EB Games.

Anyone wanna take a drive to New York next weekend?

I would advise against a PSP purchase right now. There is a PSP Slim in the works and is rumored to be shown at E3 this year.

I’ve read it will not only be thinner, but feature and updated directional pad more like the new PS3 Sixaxis D-Pad, have a better screen, faster drive, and 8gigs worth of internal memory. This is just what I’ve read, but I know they’re designing a slimmer one that will come out sometime around August or September this year.

Thanks for the heads up – can’t say I’m surprised, but perhaps I will wait a week and just see what comes out of E3. Can always buy myself Transformers to keep me amused in the meantime.

Whell I haver both the Zune and PSP and they are both good for difrent things. I love my zune because of the easy interface and NO DAMN CLICKWHEEL. Also the memory is outstanding. My PSP is nicer for nice trips or if im bored. The Psp is defently not the practical sulution when it comes to memory.

i realy doubt the “psp lite” will come about. i think the design of the psp is good and it isn’t that heavy. it fits in your pocket and is easy to carry around ect. besides the last thing it needs it to be made smaller, a smaller battery is not a good idea