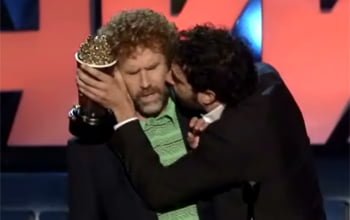 The MTV Movie Awards are an easy sell in terms of entertainment for a Sunday night. Pack the biggest names in music, movies, and television in one room with a throng of fans, apply a funny host, and let them soak together in a silly mess for the next 2 hours. No matter who is up for an award you’re bound to get a few great moments, and last night was no exception as host Sarah Silverman mocked now-jailbird Paris Hilton, and Will Ferrell & Sacha Baron Cohen shared the best on stage kiss.

Those relative highs are definitely the best reason to watch, although there’s more than enough lows if that’s more your style. Some of the most notable moments of the night included an almost-kiss between Silverman and Jessica Biel, which was perhaps funnier than anything else; watching a seemingly drunk Bruce Willis introduce the Best Fight award alongside Shia LaBeouf; the uncomfortable low as Hilton was taunted by both Silverman and the crowd about her trip to prison; and the aforementioned necking as Cohen forced a big wet one on Ferrell following their win for Best Kiss in Talladega Nights.

And lets not forget about the performances, which included the U.S. TV debut of Britain’s much-revered Amy Winehouse, and a truly jaw-dropping rendition of “Umbrella” by Rihanna and Jay-Z. Rihanna’s performance was most notable however since it featured the Barbados-born singer in a bondage-like getup as her dancers, in similar gear, twirled around large purple umbrellas. (Don’t get me started about how stupid the lyrics are for this song, or the fact that she shouldn’t be allowed to pretend she can pull off that whole reggae vibe.)

Canadians should also be proud of one of our brightest comedians, Mike Myers, who took home the MTV Generation Award. While Cameron Diaz didn’t exactly provide the best introduction, Myers more than made up for it with an Austin Powers inspired dance number.

After all the cracking of wise, and showing of cleavage, Pirates of the Caribbean: Dead Man’s Chest walked away with the top award for Best Movie and Johnny Depp pirated off with Best Performance.

Catch the entire show all over again airing on MTV Canada all week, or for easier viewing head over to MTV.ca and watch as much of the show as you like. The full list of winners follows below: