Food, rides, and toilet history all at The Ex 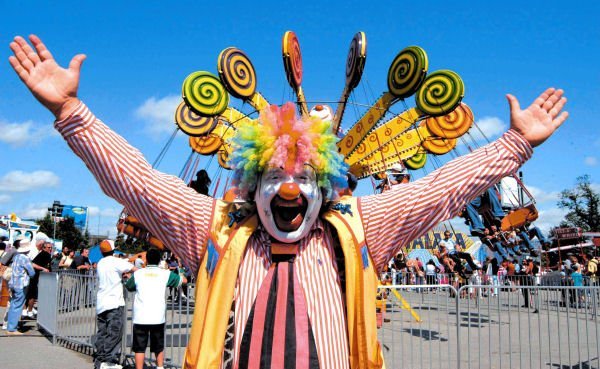 Doo Doo the clown welcomes you to the CNE midway

Toronto’s wet and rainy summer is drawing to a close as September draws near, but there’s one last hurrah to be had as the Canadian National Exhibition rolls into town from Friday, August 15 to September 1.

Offering some of the cheapest fun to be found in the city (at least if you can avoid the endless rides, games, and food) general admission to the CNE costs just $10. Or the truly adventurous can pick up a Magic Pass with unlimited midway rides for $31.

And as always, there are a lot of things happening during the CNE’s two-week run. The Canadian International Air Show returns once again from 1:00-4:00 for the Labour Day long weekend. The RCMP Musical Ride is also returning for a new show at the Ricoh Coliseum at 2:00 and 7:00 from August 29 until the end of The Ex. And for anyone who enjoys a good barbecue, CNE’s Ribfest is back again from 11:00 AM to 10:00 PM, August 15 to 17 and 21 to 24.

But discerning exhibition junkies will likely find more amusement from some of the more bizarre exhibits at the CNE, which seem to crop up every year. This year you can visit the Direct Energy Centre’s At Home Pavilion for an exhibit called “Sitting Pretty: A History of the Toilet,” which promises an “an interactive quiz about toilet lore” and the lore and evolution of the lovely piece of plumbing.

The Ex is open daily from 10:00 AM to midnight. Check the official website at www.theex.com for more information about the events and exhibits.

“He’s not just some guy, Marge. He’s a carny and part of a noble tradition. Carnies built this country. The carnival part of it anyway, and though they may be rat-like in appearance, they are truly kings among men!” -Homer, The Simpsons