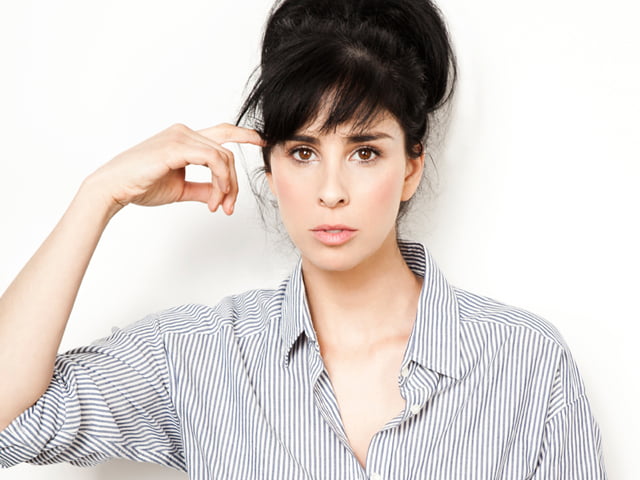 The JFL42 Comedy Festival is returning for its second year in Toronto, and for 2013 it boasts several high profile comedians, including the entire cast of Family Guy, Aziz Ansari and Sarah Silverman. The festival will run for ten days from September 19 to 28.

In addition to the headliners, the festival has 42 awesome things (AKA acts) who will be a part of the over 100 shows.

The festival is interactive in that pass holders can build their own schedule. If there is high demand for an act, then extra shows may be added or shows may be moved to bigger venues.

All three headliners will play at the Sony Centre for the Performing Arts. On Friday, September 20 Sarah Silverman will take to the stage with her witty and sometimes crude sense of humour. Silverman has appeared on Saturday Night Live, produced and starred in The Sarah Silverman Program (2007–2010), and has credits in Wreck it Ralph and Take This Waltz. She has recently worked on the JASH comedy collective on Youtube alongside Michael Cera, Tim & Eric, and Reggie Watts.

The hilarious Parks and Recreation star Aziz Ansari will appear on Friday, September 27. With his quirky sense of humour and funny voices Ansari was named as one of Paste Magazine‘s “Top 10 Comedians of the Decade.” He recently starred in This is the End with Seth Rogen, Jonah Hill and James Franco.

Family Guy Live will round out the headliners on Saturday, September 28. Complete with a 40-piece orchestra the main cast of the show including Seth MacFarlane, Alex Borstein, Seth Green, and Mila Kunis will do a live script read.

Another notable performer is Bill Burr, who made a name for himself through a recurring role on the second season of Chappelle’s Show. He is the host of the popular comedy podcast Bill Burr’s Monday Morning Podcast and will appear in The Heat with Sandra Bullock and Melissa McCarthy.

Hannibal Buress, who was described by Chris Rock as “The funniest young comic I’ve seen in years” will also be one of the 42. His stand-up is based around careful word choices and an interesting way of seeing the world. Buress has appeared on 30 Rock, Louie, The Eric Andre Show and Saturday Night Live.

Mark Maron is famous for his podcast WTF with Marc Maron, which is regularly one of the top downloads on iTunes and has featured Judd Apatow and Robin Williams. Maron has been on Conan 43 times as well as Letterman, and Craig Ferguson.  His IFC scripted series MARON premiered in May 2013.

Famous for his role in the Comedy Central Roasts of Donald Trump, Charlie Sheen and Roseanne Barr, Anthony Jeselnik will also be included in the lineup. Jeselnik earned himself the Comedy Central Show, The Jeselnik Offensive. He has a calm and dramatic voice that would be fitting for a third-person narrator that gives his I’m kind of a terrible person jokes an extra edge.

Also appearing will be Maria Bamford who appeared in The Comedians of Comedy alongside Patton Oswalt, Zach Galifanakis and Brian Psehn. Her comedy is part creepy voices, part fast talking and part harsh truths. She was named one of Rolling Stone‘s 50 Funniest People in 2013 and appeared in the latest season of Arrested Development on Netflix.

The JFL42 pass starts at $99 for access to one headliner, with an optional upgrade to premium seats for $129, as well as the rest of the festival. For $199 you get access to all three headliners and the other 42 acts, while $299 gets you premium seats.