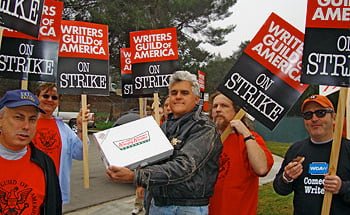 Day three of the Writers Guild of America strike has dawned, and about the only thing that’s changed is the number of articles appearing on the topic.

With every entertainment-consuming North American affected by the strike, the media is happy to dive into the debate, offer their two cents, and provide any updates that have become available in the last 72 hours.

One of the most interesting topics I’ve heard so far was the idea that Daily Show host Jon Stewart and/or his production company, Busboy, was going to pay writers out of their own pocket. One article from Portfolio.com claimed that this was true, but then added the following to their post:

Jon Stewart’s rep just called back to deny the information above… “While I hesitate to knock down every rumor that comes up, the assertion that Jon and/or Busboy Productions will be paying for the staff is false and we have no further comment beyond this at this time.”

That hasn’t stopped numerous news sites from picking up the story and running with it, apparently in the wrong direction, but it seems to just be a rumour at this point.

On the other hand there’s also some talk that a few late night shows could leap back on the air by simply ad-libbing their usually scripted segments. Ellen Gray of the Philadelphia Daily News pointed out that David Letterman returned to the air during the 1988 strike, and while he obviously has a lot of scripted elements in the Late Show, he could likely pull off a decent off-the-cuff show in my opinion.

Gray also remarked that Craig Ferguson from the Late Late Show might be able to pull off an unscripted show if his monologue is actually as unscripted as it seems.

As the week wears on though, a lot of people will start wondering what progress has been made in negotiations, and the simple answer is that there is no progress just yet. Both sides are firm on their positions and talks haven’t resumed.

Varity is going so far as to say that the strike could go into mid-2008, although that’s not surprising news.

The only update from the WGA website is that all three Democratic contenders in the U.S. presidential election, including Barack Obama, Hillary Clinton and senator John Edwards, have issued statements of support for the WGA.

Looking at the situation, it’s obvious that future revenue from the Internet could be a lucrative deal to corner, so it’s no wonder that this situation is a tough nut to crack. Traditional TV viewing isn’t dead yet, not by a long shot, but writers can’t ignore that a lot of people have turned their backs on their televisions. Viewers are now going online to watch shows, and advertisers are dropping money into the sites airing these shows. The result: producers are making money off the Internet and it’s only going to grow from here.

The Globe and Mail is also reporting that the strike has reached Canada, at least in the sense that the Writers Guild of Canada is asking its members not to accept American work that related to this strike.

The article also pointed out that three more shows have been affected by the strike: Back to You, ‘Til Death, and Rules of Engagement.

And last, but not least, it’s worth noting that this strike has some far-reaching effects. First there are the actors who also put in writing time, like 30 Rock star/writer/producer Tina Fey. Fey has already been on the picket lines and there are no doubt multiple other actor/writers doing the same thing.

Then there’s all the side industries that are affected, including anyone who provides services to productions.

And there is also the effect on the advertising industry, which will likely mean less ad money being paid out if the strike lasts for very long.