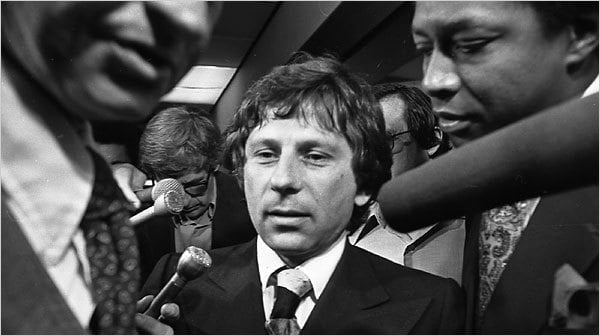 A photo from Roman Polanski: Wanted and Desired

Lazy Sunday News returns this week, and it practically writes itself with news that director Roman Polanski has been arrested in Switzerland. Other quick items this week, Ninja Gaiden Sigma 2 has some less than stellar innovation for the PS3, and RottenTomatoes.com names the 100 worst movies of the last decade.

POLANSKI ARRESTED: It has been over 31 years since famed director Roman Polanski fled the United States following the 1977 case where he pleaded guilty to committing unlawful sexual intercourse with a minor. Leaving the country before he was sentenced, Polanski has been living in France since then, and has only visited countries where the U.S. would not be permitted to extradite him. On his way to a film festival in his honour though, Polanski was arrested by Swiss police, following a request by the Los Angeles district attorney’s office which knew about the event and had filed the right paper work to have him picked up en route to the film festival.

While the case has been tainted by long-standing reports that the original judge handling the charges violated the plea bargain agreement, and requests from victim Samantha Gailey to have the charges dropped entirely since the case has been difficult for her and her family, this just proves that the U.S. legal system does not see time as a barrier to justice.

Polanski’s attorneys filed to have all charges dropped earlier this year, because of the issues with the original court case, but the request was not considered since the court required Polanski to be present to proceed. It now remains to be seen how the case will play out for Polanski, but many of his comrades in Hollywood are calling his arrest in Switzerland ridiculous and a waste of time and money.

Known for his films Rosemary’s Baby and The Pianist, the director can still fight against the extradition procedure in Swiss courts, but that could take anywhere from months or years to settle.

WORST OF THE WORST: RottenTomatoes.com has named the 100 worst movies of the last decade and frankly the only surprise is that films like Daddy Day Camp, Epic Movie, and Battlefield Earth don’t rank in the top ten.

While the recent release Whiteout, with Kate Beckinsale, only squeaked into the list at #100, there was no shortage of recent films either, including All About Steve at #96, Street Fighter: The Legend of Chun-Li at #44, and Miss March at #39.

The list also features numerous Oscar winners, twelve to be exact, but was topped the most by, you may have guessed it, director Uwe Boll, and the directing duo Jason Friedberg and Aaron Seltzer, who all have four titles in the list.

NINJA GAIDEN’S BUSTY FEATURE: On September 29, Ninja Gaiden Sigma 2 will be available for the PS3, and it’s coming with a minor little upgrade from its previous versions. Thanks to the PS3 Sixaxis controller, which tracks the controller’s movements, gamers will be able to make the girl’s breasts jiggle in the game by shaking their PS3 controller up and down.

I’m not even kidding.

Anyone looking for proof that gaming is going downhill need look no further than this news. Forget about quality storylines, clever dialogue, or even challenging levels… clearly what all gamers want to know is, can they jiggle the heroine’s goodies?