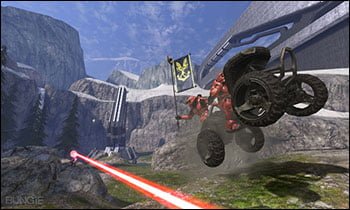 This has been a very busy week for Microsoft and their Xbox 360. So busy in fact that I couldn’t keep up with all the news, so in an effort to tackle it all at once, I decided to summarize what’s been going on. To put it simply, the Halo 3 multiplayer beta arrives on May 16, Gears of War has a new multiplayer mode, and you’ll soon be able to chat with your Windows Live Messenger friends from the Xbox 360.

On the Halo 3 end of things, Microsoft and Bungie Studios announced that the multiplayer beta will launch at 5:00 AM (PT) on May 16, giving gamers who qualified a chance to play the game – and thus also give Bungie some much needed data to finish developing the title. In Halo 3, Bungie has promised fans a chance to step back into the role of Master Chief to battle the Covenant and fight the looming Flood threat.

New vehicles for the game include the Mongoose, an agile all-terrain vehicle, and new weapons like the improved Assult Rifle, the Brute Spiker, a Spartan Laser – not to mention the new Spike Grenades.

Gamers could qualify for the beta in a couple of ways, the simplest being that they could buy a copy of Crackdown, which comes with a special download link to get the beta. Alternately, gamers could qualify through the “Rule of Three” promotion that basically required them to play three hours of Halo 2 and then be one of the first 13,333 to register on the Halo3.com website.

The only catch in any of this is that you’ll need to have an Xbox Live Gold account to play the Halo 3 beta. For anyone who does get online to play, they’ll find what the studio is describing as, “richly detailed, action-oriented maps” dubbed Snowbound, High Ground and Valhalla, “which represent a mixture of large- and medium-scale combat environments”.

For a glimpse into the future, head over to Bungie’s website for behind the scenes video. Halo 3 is set to hit stores sometime this fall.

Then, over at the Gears of War camp, fans were treated with an update earlier this week which not only changed the online gameplay a bit, but also delivered a new multiplayer mode called Annex.

In Annex, gamers can only win one way – they have to capture on of five special locations on the map, and hold on to them long enough to score their team enough points to win. Each location, or objective, has a maximum score level that can be given out, and then a new objective will become active and the teams will have to scramble to take control of that location.

In addition to this add-on gameplay mode, there have also been some updates to the core of the game. These changes include:

And finally, beginning the week of May 7 Microsoft will launch the Xbox 360 Spring Update which will include the addition of Windows Live Messenger to the system. Once the patch is added gamers will be able to text message their friends while they play games, listen to music, or watch movies. That’s in addition to the ability users already have to send audio and video messages to their buddies.

To make life a little easier, users can plug in any USB keyboard to type out messages, but Microsoft will also start selling a QWERTY mini keyboard this summer that will connect directly to the Xbox 360 controller.

Along with this, the Spring Update will also include the following enhancements and changes:

Check out www.xbox.com for more on any of the stories above.