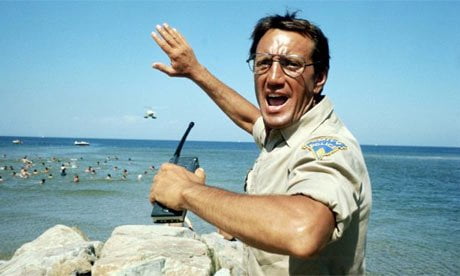 Amidst all the speculation on what caused the death of Heath Ledger and the endless talk about Britney Spears and her sad and tragic life, another actor passed from this mortal coil, and this is a guy that should be noticed and should be talked about. He was a terrific but underrated actor who should have been ranked right up there with the likes of Steve McQueen – but it just didn’t quite click for him.

He was born Roy Richard Scheider in 1934 in New Jersey. He was a sickly child who excelled in school (history major) – he then drifted into action while in university and loved it – and it loved him.

He did TV stuff and a couple of film roles before hot young filmmaker William Friedkin cast him in a co-starring role in the multi-Oscar winning The French Connection (for which Scheider was given an Best Supporting Actor nomination). Friedkin wanted to cast Scheider in The Exorcist as well but in an act of extraordinary, not to mention rare generosity, Scheider actually took Friedkin to a play featuring another young actor named Jason Miller and urged Friedkin to cast him instead as Scheider felt Miller would be better. Friedkin did as Scheider suggested and Miller got the career making role.

In 1974 Scheider was cast as Chief Martin Brody in a film that would make history – make a huge star out of the director, and make Roy Scheider a fortune… Jaws.

After Jaws Scheider was featured in another Oscar nomination heavy film Marathon Man – then Friedkin came calling again for Scheider to star in his big budget remake of the old French adventure film The Wages of Fear – Friedkin made a mistake by calling his version Sorcerer, a confusing title but one of the best American films of the seventies. I love Sorcerer and highly recommend it to anyone and everyone who digs serious movies made by serious guys. Sorcerer died a quick death at the box office because it was released the same day as a film called Star Wars – the day that the movie climate of North America changed forever.

Scheider was then cast as a character named Michael Vronsky in a film being made by a young director named Michael Cimino – the film was called The Deer Hunter. Scheider had to back out of the film at the last minute because he had an iron clad and very lucrative contract to star in Jaws 2 and the scheduling between the two films clashed. Robert DeNiro stepped in once again the results were big bucks at the box office and numerous Oscar nominations.

Scheider would be on the receiving end of that kind of fateful Hollywood harmonic convergence just over a year later – his old buddy from Jaws, Richard Dreyfuss, had been cast as a fictionalized version of Broadway and film director Bob Fosse in the film All That Jazz – but a couple of weeks into rehearsals Dreyfuss felt that he could not connect with the music and the dancing aspects of the film and felt awkward doing them – so he bowed out. Roy Scheider replaced him and the film was a masterpiece. Roy Scheider earned his first Best Actor Oscar nomination for the role.

Since that film Scheider drifted from small roles in big films to big roles in small films and he did a TV series, seaQuest DSV.

Roy Scheider died of skin cancer at the age of 75. He was a big part of some of the greatest films in the grandest epoch of American cinema – the 1970s. He should be remembered – and remembered for a lot more that just being the actor that uttered the famous line… “We’re gonna need a bigger boat.”