Ladies from ‘The Hills’ descend on MTV Canada 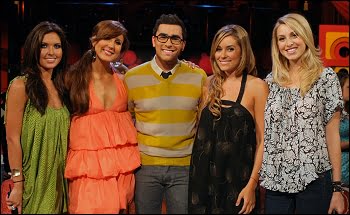 Hundreds of fans lined up early on Monday, April 23 for the chance to see those ever so popular gals from MTV’s hit reality series The Hills, who were in town for a special taping of MTV’s The Hills After Show finale. Although Heidi Montag wasn’t able to make it, stars Lauren Conrad, Whitney Port and Audrina Patridge were all in attendance to greet their Canadian fans.

After Show hosts Jessi Cruickshank and Dan Levy spent the hour talking with the girls about the men of The Hills, dating and internships, and the behind-the-scenes scoop on what’s been up since the The Hills finale (something about a vacation in Cabo?). Talk also hit on what fans can expect in Season 3 which premieres this summer.

The Hills is a spin-off of Laguna Beach: The Real Orange County, and follows the life of several rich girls living in LA. MTV has already announced that season 3 will go ahead, despite the fact that Conrad isn’t expected to return for what could be the final season of the series.

UPDATE: During a radio interview with Flow 93.5 in Toronto, Lauren Conrad announced that she will indeed return for season 3 of The Hills.

You can watch the episode, and other episodes from season 2, over at www.MTV.ca.