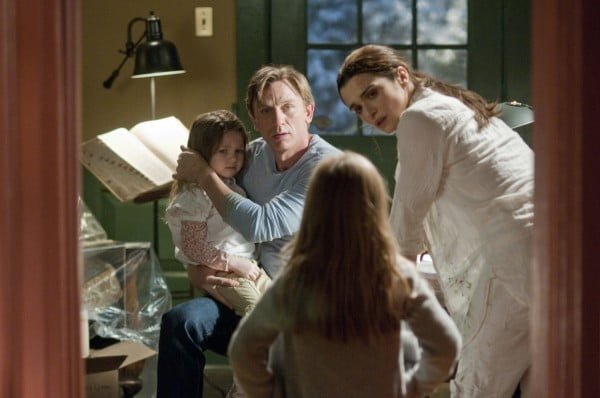 Between his films In the Name of the Father and Brothers, director Jim Sheridan has shown that he is a director with uncommon skill who knows how to deliver films on difficult topics that also have powerful mood-driven stories. In particular, In The Name of the Father is a classic from the nineties that still carries just as much weight today as when it was released.

Dream House is a contrast to Sheridan’s career, however, because of its tone, and the fact that it’s a fairly straight-up thriller, but also because of the relatively muddled progress of the story, and because it lacks the cohesive power of Sheridan’s other work.

Everyman Daniel Craig stars as Will Atenton, a big city publisher who has left New York City behind to live with his wife, Libby, played by Rachel Weisz, and two children in a small, New England town. Their life in their new home seems picturesque until they discover that they’re living in a former crime scene where the previous tenants were brutally murdered.

As Libby and Will try to uncover the story behind the murders, Will discovers a connection to their next-door neighbour, Ann, played by Naomi Watts–a connection that will lead Will to painful revelations he can no longer ignore.

Written by David Loucka, the film is tense, and moody, and the performances are quite good, particularly Craig in yet another role that is darker than one might expect from “James Bond,” but one that proves he has the chops to pull of a broad emotional range.

The problem that I have with Dream House is that the story is muddled, frequently awkward, and far too obviously written, not to mention a little hard to believe. On top of that, the film’s trailer gives far too much away about the story, and also makes the film look like a horror film, when it’s more of a dramatic thriller.

Shot in and around Toronto, Dream House has a lot going for it, including great visuals, and the aforementioned cast, not to mention a few clever ideas, but the story is uneven and messy, and feels like it needed another set of eyes to stabilize it, and more drafts to give the concept raw power. As it is, the production, and Craig’s performance, are powerful enough to make Dream House watchable, but as a viewer you can’t help but feel yourself drawn out of the story by the sloppy scenes that feel jumbled together.

The DVD has a few extras that add some depth, including interviews with the cast, which can be fairly interesting, a great Making of Dream House featurette, which looks at the production and sets, and Burning Down the House, a featurette that shows how the crew made one of the last major scenes possible.