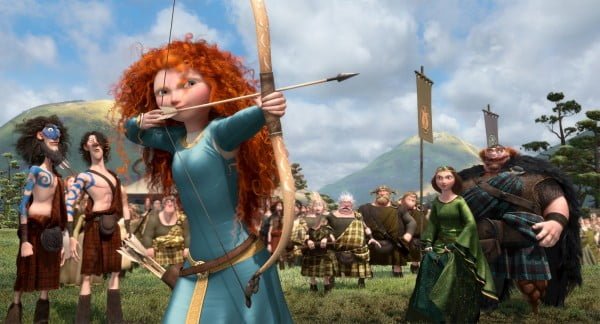 A scene from Brave

Like a lot of people, I have a soft spot for Pixar and their incredibly charming style of storytelling. Compared to their first few films though, the studio is not creating the vivid work we once were used to seeing, which is what established the company’s credibility with worldwide audiences from the start. That’s not to say that Brave is somehow a bad film, but the difference from a few years ago–when the studio released films with spellbinding stories–is just that Brave is not exactly exceptional.

From the perspective of the animation, Pixar thankfully still proves its skill in Brave with dynamic visuals and effects that bring the characters, creatures, and maybe most prominently, the locations, to life. Princess Merida, as voiced by Kelly Macdonald, is a fiery spirit with hair that matches her personality, and Pixar has brought that symbolism to life in a way that would not have been possible a few years ago, simply by giving her hair a life of its own. Likewise, the story revolves around animals that are rendered with fur and movements that seem vividly realistic.

Visual realism is no longer enough though, in animated films. Watch Finding Nemo, Wall-E, or even Up, and you will be amazed by the animation, but viewers walk away from those films feeling touched because the characters are vibrant, vivid, and heart-rendingly real.

The story in Brave, which is a first for Pixar’s wordsmiths, as it follows the story of a woman–a young woman, in fact–who is trying to find her place within her kingdom.

As Merida enjoys running around with her bow, living life among nature and being untamed, her mother, Queen Elinor (voiced by Emma Thompson), has plans to follow the demands of history and wed her daughter off to one of the neighbouring Lords.

For Merida, the whole plan, and her years of training to be a lady, are some form of terrible punishment, and she vows to do whatever she can to put a stop to it. Unfortunately for her mother, that vow leads Merida to a witch who can help the princess change her fate, but at a cost that could lead to even more trouble. Tearing a page from Brother Bear, perhaps, Elinor is turned into a bear, and King Fergus (voiced by Billy Connolly), has a notable history hunting bears ever since one ate his leg years ago, so that sparks a hunt for this bear that has miraculously appeared inside the castle. 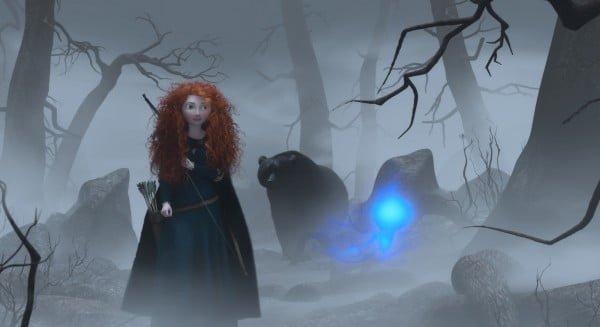 Diving into the basic culture of ancient Scotland, Brave is undeniably beautiful and moving, and for anyone who has visited the country, I think it’s easy to say that Pixar captured the essence of the wild, stunning landscape. The castles are big and imposing, and yet tempered with warm wood. In the forests, the trees soar, and the wisps of fate are bright and cheery, but the standing stones feel wild and cool. The film captures the clashing nature of the land and makes great use of each elements. I also really enjoyed the work of the exceptional cast, and maybe most of all, I enjoyed the wonderful authentic music by Patrick Doyle, plus the vocals of Julie Fowlis, who frequently gave me chills.

On these levels, Pixar’s work is recognizable from every film they have ever touched. In terms of the story, which was co-written by directors Mark Andrews, Steve Purcell, Brenda Chapman, plus Irene Mecchi, the basic concept is entertaining, but the heart just doesn’t seem to be in it.

For one thing, the story revolves around the emotions between mother and daughter, but between Merida and Elinor, some vital spark is missing. Their story, while mimicking the simplistic nature we have seen before, is not deep enough. They clearly love each other, and the ending is meaningful, but it hardly registers on any deep emotional level. Compared to Pixar’s triumph, Finding Nemo, this story is Disney-lite, either because we don’t have the likes of Andrew Stanton, John Lasseter, or Brad Bird involved, or simply because the story just never came together for the team.

While I have a hard time taking shots at Pixar, which I still consider to be one of the better studios in the world, I can’t help but wish Brave was the movie it could have been. As someone who loves everything about Scotland, and since I appreciated the concept of Merida and her family, this movie could have been so much more, but the spark was just not there. Worse, I fear for Disney’s inevitable push to pump out sequels, except that it could lead to some genuine chances for meaningful stories if Pixar gets a better hold of the concept next time.

The film is, at least, a huge improvement from Cars 2, but it’s not as raw as the emotions of Toy Story 3, and that was a story about action figures and stuffed bears. Somehow, Pixar needs to find a way to tell stories about human characters that can rival Finding Nemo, but so far, humans have only been side-elements in their stories about things and creatures with bigger tales to tell, and perhaps that’s the first issue they need to address moving forward.