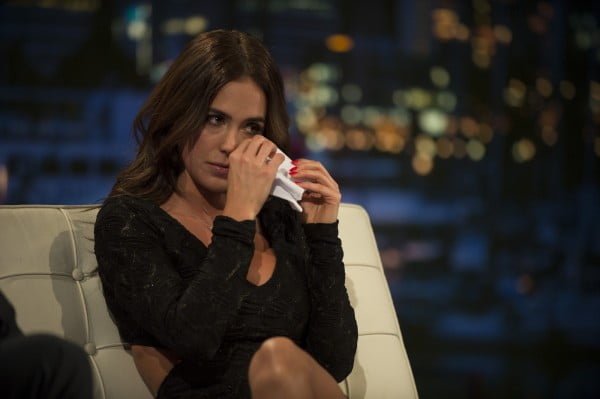 Whitney wipes away a tear

It’s that moment we’ve all been waiting for. Finally the jilted Bachelorettes are back together for an in-studio no holds barred bitchfest about what really happened during this season of The Bachelor Canada.

Unfortunately, last night’s special episode of “The Women Tell All” meant plenty of screen time for awkward host Tyler Harcott who rates about a five on the charm-o-meter and continues to prove that he doesn’t quite cut it as the Canadian Chris Harrison.

The show opens with a series of clips from throughout the season: compulsory shots of Bachelor Brad Smith in various states of undress, evening-gown clad women being catty to one another, lots of product placement and all the other stuff we know already. Let’s get to the gossiping ladies!

Melissa Marie, the playboy model/mom who was ousted from the mansion in week two, kicks things off by complaining about the choice of bachelor. Apparently Brad was just another typical nice guy and since there are plenty of those out there (where Melissa, WHERE?) she wasn’t impressed.

Paris Hilton impersonator Tia pipes up at this point concur that she also wasn’t feeling a strong connection with Brad. Ah I see, apparently this “Tell All” is a forum for rejected women to insist that they weren’t that into him in the first place. Sure ladies, that’s why you kept accepting the roses until you were forced to exit down the driveway of despair.

Gabrielle is the first Bachelorette deemed interesting enough to join Tyler on stage in the hot seat. We know this is going to be good because even her name elicits “oooohs” and head shakes from the far-too-invested studio audience. Cue the clip montage of Gabrielle’s best one-liners from the show including: “there are a lot of skanks around here” and “I think skanks finish last.” She sure knows a lot about skanks.

Gabrielle insists she’s just keeping it real but Brittany correctly points out that sometimes “telling it like it is” is actually just bullying. Kara comes to Gabrielle’s defense and applauds her honesty. Evidently these girls are besties now and all that mean stuff Gabrielle said about Kara being “manly” is forgotten.

Tyler concludes his sit-down with Gabrielle by asking her if she’d like to offer any apologies for any of her actions. She offers a faux-pology (“I’m sorry if you’re mad”) to Brittany who then proclaims that she actually loves her and the two hug it out. Apparently Gabs is some sort of charming sorceress and is sure to do well in her future law career.

Next up, Tyler makes us all cringe while introducing a clip montage about the Bachelorettes fake boobs! We watch some unaired footage of the girls groping each other’s’ breasts in the hot tub and all the boyfriends who have been forced to watch this show suddenly need some alone time.

Tyler then sets women back about a trillion years by asking the ladies to raise their hands if they have fake boobs. This public shaming is not what I had in mind when I heard that the women would be “telling all”. And now, let’s see a show of hands for anyone who still has an ounce of self-respect left. Anyone? Okay moving on. 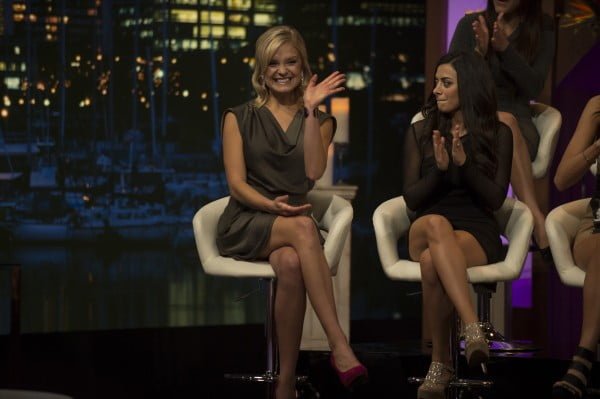 Next up, everyone takes a few minutes to swoon over doe-eyed Chantelle and her totally awesome life choices and squeaky Disney squirrel voice.

Laura B. then takes the stage and Tyler rehashes the less-than-noteworthy moment that was this season’s BIGGEST DRAMA: Laura taking a few moments to shed some totally reasonable tears in the bathroom after spying Brad locking lips with Whitney. Because this is the Bachelor Canada and we’re all so freaking polite, everyone once again rushes to defend insecure Laura and what a super sweet, wonderful girl she is.

We finally might get some real drama as Whitney makes her grand entrance accompanied with lots of boos from the audience. The villainess in Lycra tries to defend her Mean Girl persona as her fellow Bachelorettes roll their eyes. Tyler asks her about her behavior and she insists, “I never said anything negative directly towards any girl.”

Awww hell no, Gabrielle is not having any of that. She calls Whit out for being a “sneaky little cockroach” (whatever that means) and congratulates her on successfully achieving all of her attention-whore ambitions.

Whitney digs her nails into her palms and attempts to elicit some tears while offering an apology for maybe, kind of being a little bit of a bitch. She dabs away some non-existent tears with her prop tissue (brought to you by your local Shoppers Drug Mart I’m sure) and everyone begrudgingly applauds her off the stage.

Next up, Tyler strikes out with up some cringe-worthy softball themed puns to introduce fan-favourite Kara. The third place Bachelorette can’t say enough good things about Brad but Tyler is determined to elicit some tears so he forces her to watch an über depressing montage of her very-public dumping on last week’s episode.

But wait a minute; Kara tells us that she actually wasn’t in love with him after all. Is this the go-to defense of jilted Bachelorettes? Are they all just hanging around for the free wine and roses?

Tyler’s going to clear all this up by bringing out the man himself. Bachelor Brad takes the stage and agrees that it was a totally mutual ending. But wait wasn’t there a lot of crying?

I’m confused but there’s no time for that because Tyler’s about to unleash the collective fury of all the former Bachelorettes upon the poor Brad.

First up, no-date Nicole asks Brad why on earth she was forced to spend her entire time in the house cooped up in a mansion with a dozen ladies. He gives a suitably apologetic response and she smiles and nods in her forgettable way.

Brad then pounces on Tia for making up lies about telling him there was no connection. Ooooh snap.

Brad is holding his own here with the ladies, which isn’t all that impressive since they’re not exactly being very harsh on him. He then offers an apology to Laura B. and tearfully (real tears!) tells her what a wonderful person she is. She bats her eyelashes and all is forgiven. 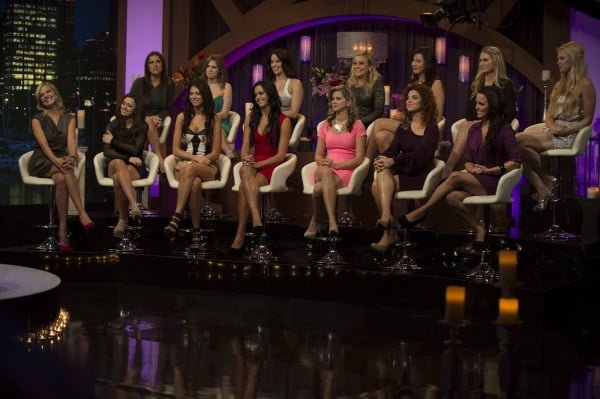 I’m sorry, isn’t this the part where all the women are supposed to gang up on Brad for rejecting them? Everyone seems to be falling over each other to be very nice–this would never happen in America!

Next up, a funny gag reel of those unseen moments which includes a New Orleans’s Jazz band member repeatedly mispronouncing Mississauga as Missinsagoo, some hair extensions set aflame, and Brad receiving a prolonged ear nuzzling from a feisty horse. If this was the entire show we might actually have a hit on our hands here folks.

So to sum up, all the ladies love each other (except Whitney) and nobody cries (except Brad) so this may be the least dramatic “Women Tell All” on record. But hey, at least we got to figure out once and for all whose boobs are real.

Now we get the extended sneak peak at next week’s episode. Hang on; is no one wondering why Bianka wasn’t forced to sit in the hot seat in front of the Women who are not telling all that much?

Ah well. On the heart-racing finale, Bianka and Whitney will be meeting Brad’s parents and his extremely disapproving sister who seems nice and crazy and hell bent on raining on his parade. Oh also, there might be a proposal.

Tune in next week to find out if this Made in Canada fairytale (Tyler’s lame phrase, not mine) will have a happy ending.

The Bachelor Canada finale airs on Wednesday, November 21 at 9:30 PM (ET/PT) on Citytv. 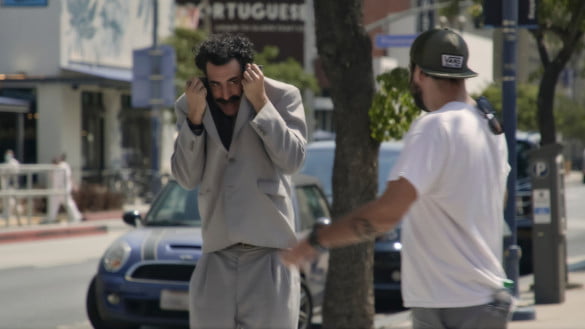 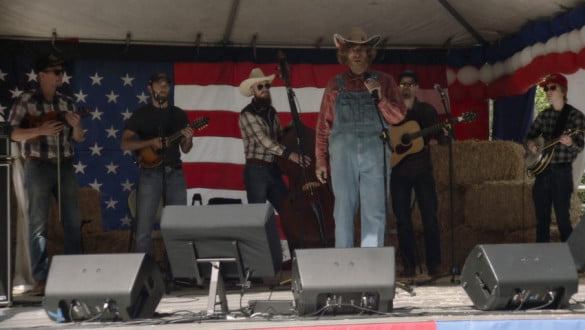 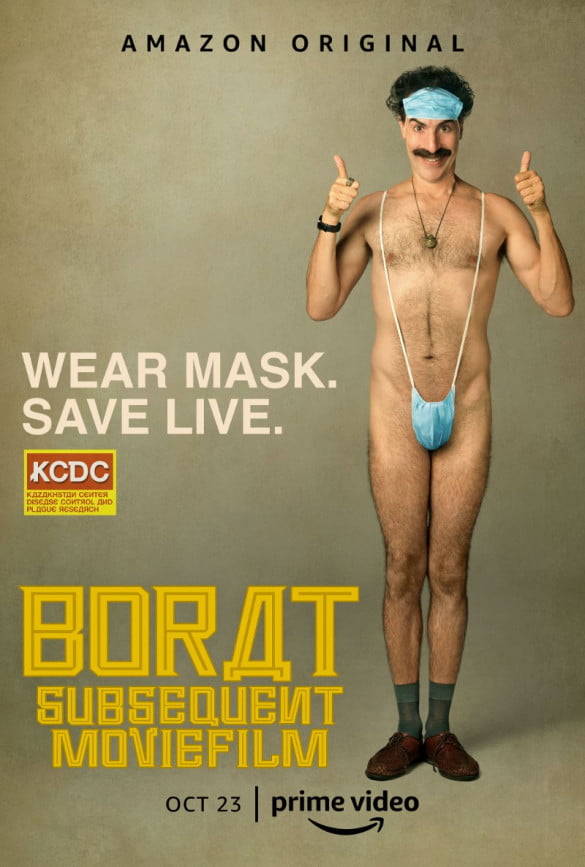 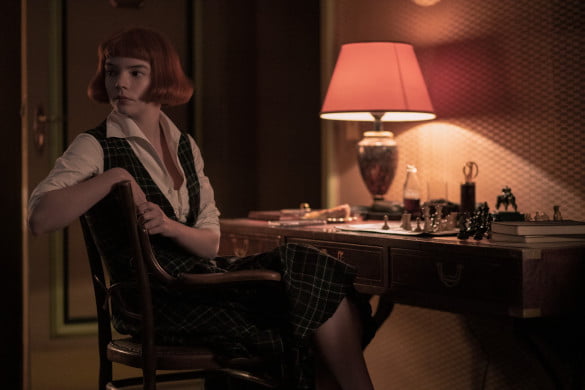 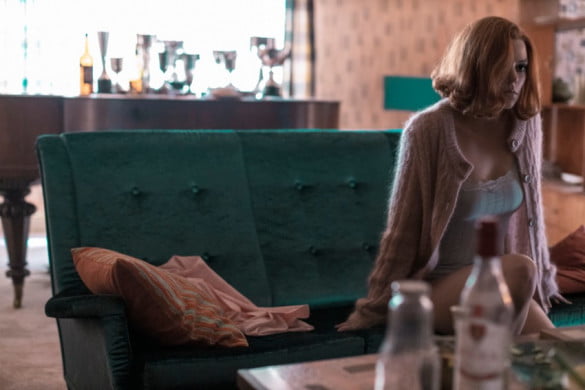 All photos courtesy of Citytv.