Director Roland Emmerich seems to be taking a break from blowing up the world and focusing on more intimate targets, like the centre of the American government, but whatever scale you’re talking about, White House Down is exactly what we have come to expect from the bombastic filmmaker.

Perhaps Emmerich’s last theatrical film, Anonymous, was an indication that the doomsday director was branching out, but for any intelligence that may have been found in that film, White House Down falls back on the usual explosions, gaping plot holes, and funny characters that Emmerich keeps returning to.

Of course, that’s not exactly a bad thing if you’re a fan of big, dumb summer blockbusters, especially if you can appreciate the way this one is both patriotic, while lampooning that patriotism in the same stride. Channing Tatum stars as John Cale, a cop who aspires to greater things in life that what he did with his wasted youth–namely, impressing his daughter (played by Joey King) by getting a job protecting the President of the United States. Through random events, he gets his wish when a crew of hired guns breaks into the White House when John is on a tour at the iconic building with his daughter.

When John is separated from his daughter during the initial chaos as the bad guys blow up the top of the United States Capitol dome, and try to take the President, played by Jamie Foxx, hostage.

Ripping a few pages from the Die Hard screenplay, Tatum plays a close match to a younger John McClane, but he’s a little less convincing to be honest. Tatum instead brings a certain sense of charm to the character that makes him seem a lot softer than McClane ever was in any of those films.

As an on screen duo, Foxx and Tatum have surprisingly great chemistry that makes the concept work, but Foxx is far more restrained than usual here, acting almost as Tatum’s side kick. That works, for the most part, although Foxx easily steals a lot of scenes away from Tatum thanks to the script’s funnier moments, which tend to land on Foxx’s shoulders. White House Down is painful at times, however, because writer James Vanderbilt’s script has gigantic holes in logic. To get by those holes, you just have to accept that the White House guards, and the Secret Service, are inept, and that the military has no clue what they’re doing either.

When the film is going at full tilt though, the script is easy enough to forgive because Emmerich was clearly just having fun making this story come to life. Every explosion is like a gleeful laugh, and the bullets like they’re aimed at every critic who will hate this film for being stupidly fun.

White House Down also earns big points in my book for the gleefully portrayed Donnie Donaldson, the White House Tour Guide, played by Nicolas Wright. In a film that was actually low on zingers, Wright comes through with some of the best lines in the film, and one of the biggest laughs of the film too.

While the summer is thick with big blockbusters, White House Down is genuinely entertaining, and you can bet that I’ll be watching it when it arrives on Blu-ray, and again when it’s just airing on some Saturday afternoon. Emmerich has become the king of these silly, escapist adventure films, and I’ll probably look forward to the next one, even while I hope he finds a script eventually that makes a little more sense. 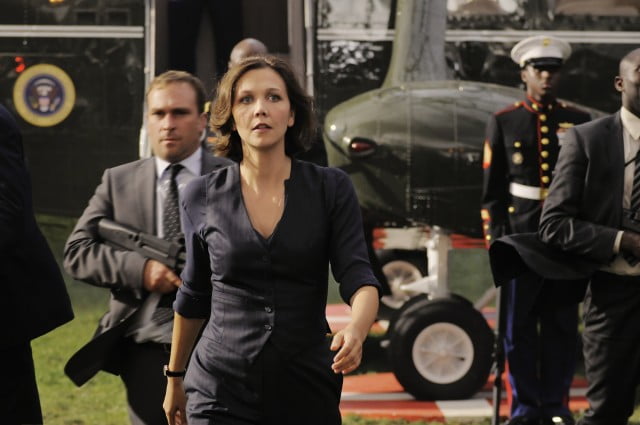