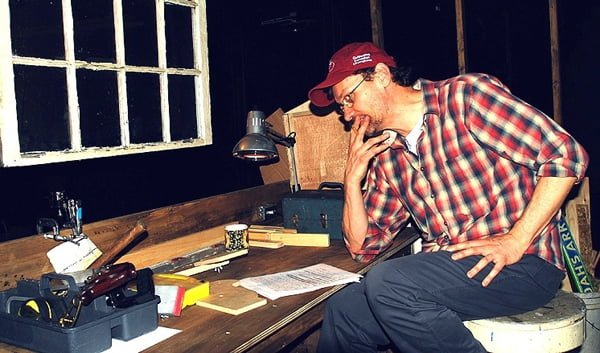 In Mourning Dove, playwright Emil Sher has tackled the moral dilemma of mercy killing, and the wider implications of what level of disability justifies such a choice. It’s a conundrum that would have Solomon scratching his head.

Directed by Lisa Balkan, whose delightful Opera on the Rocks was a hit at last year’s Fringe Festival, the play is inspired by the case of Saskatchewan farmer Robert Latimer, convicted and jailed for killing his severely disabled daughter, Tracy, in 1993.

Mourning Dove originated as a radio play, and the best elements of this medium are included in the stage version. Tina’s presence is voiced by Kimwun Perchinec, who sits offstage in view of the audience, gasping and gurgling, while the parents look out at the audience as they address their invisible daughter. This helps communicate the almost unbearable tension felt by parents listening for her next breath or next medical episode.

In Sher’s play, hardware store owner Doug Ramsay (Steve Cumyn) and his wife Sandra (Vickie Papavs) agonize over the impending operation on their disabled daughter, Tina. Both are solid performances, with some fine monologues. Cumyn’s character is the more introspective, while Papavs successfully conveys her character’s unrelenting optimism and loyalty.

To propel things forward, and to keep the action from descending into nonstop pathos, the play includes a Biblical skit about Noah’s Ark that characters are preparing for Tina. The choice of this Old Testament story with an angry God who makes choices about which animals climb the ramp to the Ark offers a suitable parable as a backdrop to this story.

Sher includes Doug’s employee Keith (played Colin Doyle), a mentally handicapped young man, as a foil. Doyle deftly captures the simple black and white morality and sense of justice of his character, who knows all too well he is considered “a freak.” Doyle’s nuanced physical presence is exceptional.

The action takes place in the Ramsay’s garage/workshop where Doug works with his hands and yet faces a monumental intellectual and moral decision. Kudos go to lighting designer Rebecca Picherack and set designer Victoria Wallace for their work.

The play is ambitious in its scope and excellent in its delivery, and at 95 minutes with no intermission, it is a tension-filled experience for the audience even though we know how it will end. Some of the playful scenes of preparing for and acting out the Noah’s Ark skit could be tightened by five or 10 minutes so the production has even more impact. The play cleaves naturally into two parts – the act and the atonement. The events leading up to Doug’s decision to end his daughter’s life are more dramatic than the aftermath, which seems like an overly long – but necessary – denouement.

The talented team that makes up the Ark Collective has come together just for this play. Now that the group has floated its first production, it could surely attract (two by two, perhaps) a wider audience to future projects.