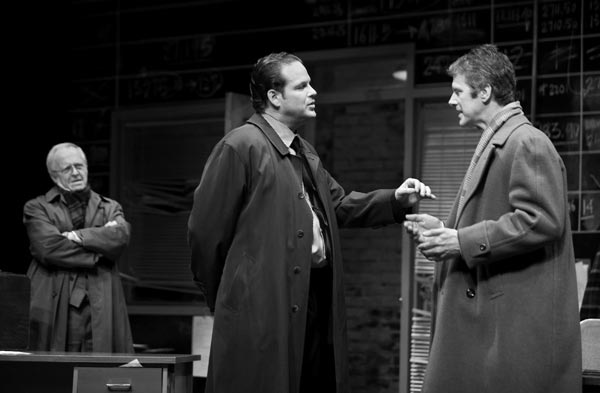 On until May 9
The Young Centre – 55 Mill Street

Once your ear is attuned to the fire hose volume of expletives in David Mamet‘s 1983 play Glengarry Glen Ross, the profane mantra begins to take on a rhythm and cadence of its own. With each line, the play (inspired by Mamet’s experience working in a Chicago real estate office in the 1960s) is more of an indictment of the dog-eat-dog unprincipled capitalism that chews up its participants. The Soulpepper production, tautly directed by company regular David Storch, is an ambitious and successful revival.

The four real estate salesmen in the cast spar and strut on a powerful set (designed by Ken MacDonald) with red leather banquettes in a Chinese restaurant – the kind of place where deals are sketched out on napkins. The flip side of the revolving set is the office, its cheap steel desks dominated by chalked-up sales results on the board above. The soundscape (designed by John Gzowski) is particularly compelling with a auctioneer’s quiet voice jabbering at high speed in the background mingled with discordant sounds of high anxiety.

The stars of this crude bunch of fast-talking shysters are Shelly Levene (Eric Peterson) , an aging and underperforming has-been desperate to stay alive in the game; and Richard Roma (Albert Schultz), a salesman in his prime whose alliterative name even sounds like it should be a marquee legend. Famous for playing cranky curmudgeons, Peterson does a fabulous turn as the frantic Levene, first begging and then reviling sales manager John Williamson (Jordan Pettle).

Pettle as the sales manager is just as malevolent as his sales staff but not quite as much of a grandstander, working his own deals and abusing his fragile and fluctuating power. Schultz oozes the kind of I’ll-get-you-in-on-the-ground-floor charm aimed at destroying the defences of unsuspecting customers. He can swagger with the best of them and appears to be having enormous fun doing it.

Peter Donaldson plays Dave Moss, the ultimate user, a salesman looking for a short cut. His particularly strong character butts up against George (played by William Webster), a desperate but morally conflicted salesman.

Rounding out the dynamic cast are Kevin Bundy as the hapless customer, acting as a perfect foil for Schultz’s ruthless sales tactics; and Detective Baylen (Stephen Guy-McGrath) as the straight man against this unprincipled gang.

Does the play work today? Certainly the desperation of succeeding in a capitalist system (that has included Conrad Black and Bernie Madoff) is just as relevant in today’s shattered economic situation. And the always prevalent rivalry between alpha males is a classic theme. The audience groaned at one particularly virulent racial slur.

The language was intended to shock back in 1983 and remains wince-inducing in 2009. But Mamet’s plays remain in the must-see American theatre pantheon for their power and honesty.