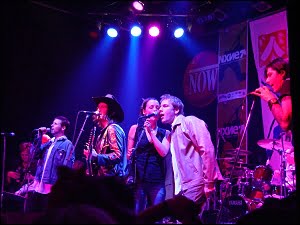 The All Star Band at White Ribbon 2003

Among the glitz and glam of last night’s White Ribbon benefit concert, the one necessary tool you needed to sport was neither a cell phone nor credit card – but rather a white ribbon pinned on your shirt.

The sixth-annual show at the Phoenix raised about $35,000, up $10,000 from last year to demonstrate the message of men supporting anti-violence towards women. Artists that showed up to support the event included Todd Kerns, Edwin, Gordie Johnson, Bill Priddle, Holly McNarland, the Dexters, Snow and The Tea Party (of whom lead singer Jeff Martin is the show’s organizer).

One of the best things about the White Ribbon concert every year is that you not only get to partake in one of the biggest schmoozefests that the North By Northeast festival has to offer, but also you get to see many Canadian singers performing cover songs together – it’s a rare opportunity, but when it happens it can either go two ways – really good or really bad.

Case in point: The elusive Gord Downie of Tragically Hip Fame performing a John Lennon cover and then showcasing a tribute to Sarah Harmer’s “Hideout” was a fantastic opener for the show. The Watchmen choosing to belt out a blasphemous version of Bob Marley’s “Redemption” was not. 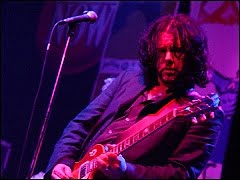 However, the main highlights of the show that won total audience approval had Todd Kerns performing some Led Zeppelin songs with the Tea Party with his metal-screeching. They rocked out an awesome version of “Cashmere” with a little Eminem 8-Mile action thrown in (for good taste, of course). But even though it was obvious Kerns didn’t know the correct lyrics to the song, his improvisation skills still smoothed over the set nicely.

“You’d better know the lyrics because I-m just a white boy from Saskatchewan,” Kerns directed at the packed house.Also, Edwin and the Tea Party’s cover of INXS’ “Never Tear Us Apart” was frighteningly good, and had the crowd singing along. Too bad they wrecked the flow by butchering Bowie’s “I’m Afraid of Americans.” But the people there didn’t care – they were just happy to hear some covers. Hmm, how come Chad Kroeger wasn’t there?

By the end of the show, most of the cast appeared together onstage to sing the Rolling Stones’ “Gimme Shelter”, a really nice sight to see and hear with McNarland’s voice adding that extra bit of sultry femininity. 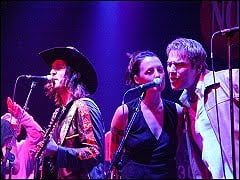 Some people in the audience left right before all the performers (minus Downie and the Watchmen) came back for an encore. They didn’t miss much. Lamely dubbed, “The All-Star Band”, they played a so-so cover of Prince’s “Purple Rain.And throughout the evening, even though announcers kept emphasizing the cause of the concert, people definitely received the message that violence towards women is bad – and perhaps that rock ‘n’ roll is the savior.